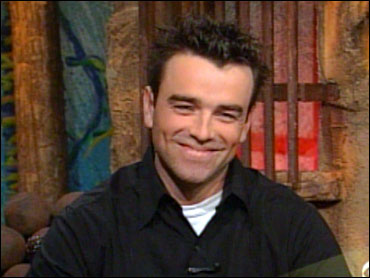 With former Morgan leader Andrew gone, Ryan knew that his head was on the chopping block.

"The writing was on the wall. That was it," Ryan O. tells The Early Show co-anchor Harry Smith. "When Andrew left, I was genuinely upset. He's a buddy of mine and it went south."

On Thursday's episode, he attempted to woo Burton and Lillian into an alliance, but apparently his powers of persuasion failed him.

He says, "I tried to work so many deals the last couple of days. I was like, 'All right, we can do this. I think you're the next person to go.' I was trying to work my magic. Hey, you know what? Rupert really liked me. Maybe I should have went up to him and said, 'Hey, you might be…'"

There were rumblings of getting rid of Rupert. But, in fact, Ryan says he had no idea. He says, "I was watching the show and I had no idea last night. I was like, 'Whoa! That happened?' Because I got snuffed out right away. They were getting rid of me right away, but that's the way I thought it was going to go."

At Tribal Council, Ryan was eliminated in a decisive vote, and became the first member of the "Survivor" jury.

Rupert continued to demonstrate his dominance, earning both reward and immunity. The fan favorite beat out the other castaways in a reward challenge that involved hitting targets with slingshots. Instead of claiming his prize - a breakfast buffet with pancakes, eggs and sausage - he generously relinquished it to Burton.

Burton was allowed to select a dining companion and he chose fellow outcast Lillian. The following morning, a boat whisked them off to a remote sandbar where they ate, drank and plotted their strategy.

Back at the camp, Sandra and Christa vocalized their feelings of vulnerability. While bathing in the bay, they acknowledged their dependence on the men to supply fish, and plotted to take down Rupert and Burton.

Rupert prevailed at the immunity challenge, which tested the competitors' knowledge of local trivia.

At Tribal Council, Christa criticized the former Morgan members for being lazy and lacking initiative. On the defensive, Darrah countered by implying that the Drakes wasted their energy performing frivolous tasks.

Ryan O. vote was for Christa. Asked his reasoning behind it, he says, "She had made some comments toward me and I didn't like. You know, in the heat of the moment, I said and made a comment and, oh, well. You got to live with it."

When it came time to vote, the tribe opted to sack Ryan. "Looks like I got snuffed out by the Drake tribe – total bummer," Ryan admitted after his torch was extinguished.

Once he was voted off. he says. he was fed well. answering a question from a caller. He says, "You actually go to a place. and there are beds. and it's a cold shower. You get hot meals and stuff like that. I actually gained quite a bit of weight in a couple of days once I came back. I gained like 10 pounds. I inhaled food like it was going out of style."