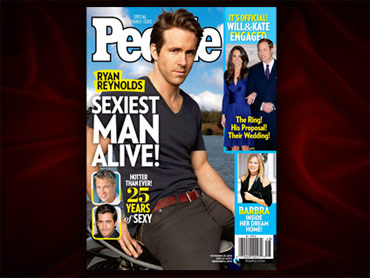 In 1985, a People magazine cover photo of Mel Gibson had the headline, "Sexiest Man Alive."

It started an institution that's still going strong a quarter-century later, and that carries an annual guessing game with it.

But the guessing can end about this year's.

She also discussed the special silver anniversary issue, which looks back at 25 years of high-profile hunks.

According to People's cover story, "His eight-pack have launched 2.4 million Google searches. Though he's married to the awesome Scarlett Johansson and his star is poised to rocket into the stratosphere when he appears as the Green Lantern next year, the 34-year old actor proves just how sexy self-deprecation can be. He prefers to sleep in the nude 'because if anyone breaks into your house, I can't think of anything more frightening than a naked 6' 3" man coming at you.' He's proud of his ability to say 'every swearword in Greek.' And he has a healthy appreciation for his native Canada, where he grew up the youngest of four brothers (one is a Royal Canadian Mounted Police Officer). 'We're trying to nationalize Sexy,' he says. 'Sort of like Medicare." '

Coyne says People looks "someone who appeals to women for multiple reasons" when picking its sexist men. "It's not just enough to have great body. He needs to have a great sense of humor. And some element of his personal life that our readers love, such as devotion to family, a committed marriage, though we've had sexy singles. But it can't be just about being a pretty face."

And Reynolds, Coyne observes, "completely fits the bill! He has a great sense of humor. … He's devoted to his wife of two years, Johansson (he said the best part of marriage was 'getting to hang out with your best buddy every day'), he loves motorcycles, and he loves to work out (though when beefing up for a movie, it's all weights and no cardio. He burns off calories too quickly)."

How did People come up with the term "sexiest man alive"?

"We didn't set out to create a franchise," Coyne says. "In 1985 we were slated to run a cover story about Mel Gibson. In an editorial meeting, we were looking for a cover line that would go well with the photo. An editor was looking at that now iconic photo of Mel with those searing blue eyes and the editor exclaimed, "He's the sexiest man alive." It was so good and so appropriate that we put on the cover and created an institution."

The new issue also portrays other sexy guys in their "man caves," Coyne points out:

Man caves have come to mean any spot that a man believes belongs to him and solely him. It could be a game room or tricked-out bathroom or a recording room, in the case of Tommy Lee. And why Tommy Lee? What is one woman's definition isn't the another's. Tommy did great photo shoot with us. Clearly he's a very entertaining charismatic guy.

For many, many women, a sense of humor is the sexiest thing a guy can possess. Maybe a guy who could cook would be close second, but Conan has shown how willing he is to find the humor in his life and/or make fun of himself over past six months.

The magazine also features a "supernatural" spread highlighting hunks on shows about the paranormal.

Such as Joe Manganiello

He stars in "True Blood"

From the Vampire Diaries?

How could you not?! They are astonishing in their physical appeal. Joe is 6' 4", is frequently shirtless on "True Blood" and is a man's man. Not a pretty boy. He's a rugged. This is the construction worker you wish you'd pass on the way to the office!

And Ian is a good counterpoint. Joe is sinewy, a brute -- there is something very smoldering and sinister with Ian. Most people know Ian as an actor on Lost. He played a weakling that show. His character was impressionable, didn't stand up for himself and was killed off in first season. But Ian is enjoying a successful second act in his career in the "Vampire Diaries" playing the villain.

Anything is possible. Working in entertainment, five years ago, no one would have thought Kate Gosselin would become one of the biggest TV stars of our time. So who knows what will happen to Mel? The one important point to note is that, when you look back on all of the issues, while some of the men no longer seem sexy, at the moment … they captured what was most sexy right then."

Another famous People cover was the on e in 1988 when it named John F. Kennedy Jr. its "Sexiest Man Alive."

JFK was our youngest "Sexiest Man" ever, at just 27 years old. This was also the first time we choose someone who wasn't an entertainer.Traditionally, the title goes to someone who's a TV, movie or music star. There's a case for an athlete (like a David Beckham), but it hasn't happened yet. JFK Jr. was our youngest cover (subject), while conversely Sean Connery was our oldest cover model. He was 60 when he appeared on our cover in 1989, just a year after JFK Jr.'s cover.

For a complete list of all 25 "sexiest" men, and an array of other noteworthy facts about them, go to Page 2.

KELLAN LUTZ (actor from "Twilight")
This man can sell anything

JON BON JOVI
A look back at his last 25 years