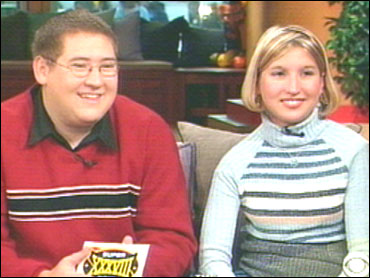 Monday morning, the latest "Week of Wishes" began with the story of a family from Sharpsville, Pa., and the very special bond between a brother and sister.

Janet Searle wrote the following letter to The Early Show about her son, Stephen:

"Through the headache we've shared came the blessing of seeing what an angel Stephen really was and is. I would love to see him honored in a very special way for the dedication and time he has given in his sister's recovery. He has always dreamed of one day being able to go to a World Series baseball game or a Super Bowl game. There are many great men in this world. Stephen is definitely one of them."

Here is their story:

Stephen and Stacy Searle were always a loving brother and sister. But tragedy made their bond even stronger. Janet and David were away for a weekend in May of 1993 and Stephen and Stacy stayed with family friends. The kids were headed to a local fishing spot for the afternoon:

"And the kids were sleeping in the back of the car and their car was hit by a milk truck," Stephen and Stacy's father David recalls.

Both children were flown by helicopter to a hospital. Stephen, an athletic 11 year-old, would recover from a concussion and bruises. Stacy, an outgoing 8-year-old who could act, sing, twirl a baton and figure skate, was shut down from the outside world with severe brain trauma.

"When the doctor met us," Jante recalls, "he did not expect Stacy to live through the first night. The only hope he could offer to us at that time was he said that if you know anybody who prays, you need to call them."

Janet says, "As a mom I had expectations of all the things I wanted my children to grow up and do and become and all of those plans now, were finished."

It was five days before Stephen could see Stacy again. But she couldn't see him. For almost a month, Stacy lay in a coma. For this devout family, the incident brought a whole new meaning to the phrase "keeping the faith." Their rewards came in bits in pieces.

Stephen says, "They didn't think she'd be able to walk or talk. But she did that and proved them wrong.

Stacy's speech returned slowly. Surgeries and physical rehab were constant. More than a year would pass before Stacy returned to school.

There were many setbacks on the road to recovery. But Stephen always kept Stacy moving forward.

Stephen says, "I'm there to push her and make her better. I want her to experience things people said she wouldn't be able to experience 10 years ago."

Janet says, "She didn't have a date to the prom. He got one of his college buddies and Stacy had a prom date. And Stephen, once again, just stayed in the shadows, in the background, with a big smile on his face."

And when it was time to think about college, Stephen insisted Stacy join him on his campus this fall. Back home in Stephen's room, Stacy's thoughts are framed on the wall.

Stacy reads, "My brother is more than blood to me. He is my very best friend. And I know we'll go through life that way - all the way to the end."

Stephen says, "It's just amazing to know that we're here together and we're helping each other.

Stacy adds, "I knew that he really loved me because he wanted to see me, like, grow up and go to college. He's always been there for me."

She adds, "He had to sacrifice a lot in his life because of what happened to me. But it didn't bother him and he loved me more than I could ever see."

Janet says, "I missed, I feel, a lot of Stephen's years. There were many times that Stephen was at a ballgame and Stacy wasn't well enough to go so mom couldn't go either and he'd look up in the stands to see mom and mom couldn't be there. And that's a hard thing for me because it's something I can't go back and do again."

Stacy says, "He never made me feel different or was embarrassed because I'd limp. He'd take me out with pride in his eyes and not let me act like a wimp."

David says, "We never really had to ask him to do that type of thing. He just did it on his own."

Stacy says, "I can actually say that in my life I would need no other, as long as I have my best friend by my side - that's Stephen, my big brother."

The Early Show invited the Searle family to the show and Stephen was surprised, almost left speechless, by the honor.

"I think in life, just have to play the hand that's dealt," he says. "You don't expect these things to happen, but they happen for a reason and if you don't make the best of things, they're just going to become worse."

For David, being on the show was a way to look back and reflect on the years gone by. He says, "When you really stop and think about it, to be able to reflect on how much God really loves us and has done so many things that even when you have a difficult day or a tragedy that comes in your life, he provides pleasures such as this and that's always exciting."

Janet says she was motivated by love to write the letter to The Early Show. She says, "I think it's part of a plan and I didn't like the plan, but we've accepted it and we pulled together - and in a really rough time - and that's what families are all about."

Well Stephen got his dream come true. Former NFL quarterback Phil Simms, now with CBS Sports, surprised Stephen and the rest of the family with news that that they are going to Super Bowl XXXVIII in Houston on Feb. 1, 2004.

The Early Show co-anchor Harry Smith extended his thanks to U.S. Airways, Embassy Suites Southwest in Houston and Hotels.com for helping The Early Show make the Searles' wish come true.