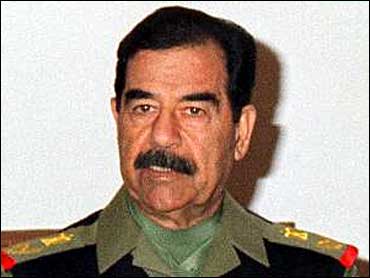 President Saddam Hussein said Monday he will not decide on cooperating with United Nations inspectors until a new resolution is approved, Iraqi TV reports.

"Iraq will look into whether it will deal with a resolution after it is issued by the Security Council," state-run television quoted Saddam as saying during a meeting with Austrian far-right politician Joerg Haider.

Saddam's remarks indicated a willingness to consider requirements of any new U.N. resolution - something Iraqi officials had previously ruled out.

"This resolution is rejected by the international community, and it will never be accepted by anybody," he said.

Saddam also repeated past pledges to resist strongly should the Americans attack.

"Iraq will defend itself if attacked by the United States of America," Iraqi television quoted him as saying.

CBS News State Department Correspondent Charles Wolfson reports the U.S. will put forward a "final, tweaked resolution" on sending inspectors back into Iraq on Monday or Tuesday. The views of Russia and France will be reflected in the new text.

The substance of the current U.S.-British resolution would not be changed after that, except for wording.

After giving Security Council members a chance to consult with their capitals for 48 hours, a vote is expected late in the week.

"We've spent seven or eight weeks debating this, and it's time for the diplomatic process to come to an end," said a State Department official.

The proposed U.S. resolution as it stands now would strengthen U.N. weapons inspections, declare Iraq in "material breach" of its obligations to destroy weapons of mass destruction and threaten "serious consequences," presumably military action, if Baghdad fails to cooperate with inspectors.

The U.S. draft gives Iraq seven days to comply with its terms from the day of passage. Iraq would then have 30 days to declare its chemical, biological and nuclear weapons programs plus another 20 days to declare additional chemical programs unrelated to weapons.

The resolution has been in the works since Iraq announced on Sept. 16 that weapons inspectors would be welcome to return unconditionally after nearly four years.

Russia, France and China contend the U.S. could use the resolution to launch an attack on Iraq without getting Security Council approval. They want the possibility of force to be considered in a second resolution only if Iraq obstructs the inspectors.

Security Council members expect the Americans to submit a revised text this week but it was unclear if it would be more acceptable to the Iraqis.

Separately, Kuwait, bucking Saudi Arabia's lead, said Monday it will allow U.S. forces already in the country to use its bases in a possible attack on Iraq, but only if the action is sanctioned by the U.N. Security Council.

"They (American troops) are here in our bases ... they are here, how can they not use them?" Sheik Sabah Al Ahmed Al Sabah, deputy prime minister and foreign minister, told reporters.

"If there is a Security Council resolution, they will be used," he said of the bases.

However, Kuwaiti armed forces will not participate in any war on Iraq, Sheik Sabah said.

Saudi Foreign Minister Prince Saud al-Faisal said in a broadcast interview Sunday that his kingdom will not allow the use of its bases in any attack on Iraq.

"The government of Saudi Arabia sees no penalty for defying Washington, but significant cost for aligning too closely with Washington in light of the bin Laden and Saddam Hussein followers in Saudi Arabia," said CBS News Middle East and Terrorism Consultant Raymond Tanter.