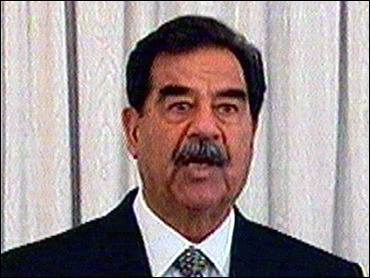 Speaking on the anniversary of the end of the 1980-88 Iraq-Iran war, the Iraqi leader did not mention America and Britain by name, but referred to them as the "forces of evil" — a phrase the Baghdad government frequently uses after U.S. and British air strikes in the no-fly zones over northern and southern Iraq.

Saddam made no direct mention of the U.S.-British demand for the return of U.N. arms inspectors to Iraq. But his speech comes as U.S. officials consider a possible attack on Iraq to oust him for allegedly building weapons of mass destruction.

"The forces of evil will carry their coffins on their backs to die in disgraceful failure," he said in the televised speech.

Iraqis backed the defiant speech by their leader.

"We don't care about the threats, they don't scare us," Naji Aboud said. Seated in a Baghdad cafe, he had just watched Saddam deliver the 22-minute televised speech.

"We are not afraid of America, Bush or others," Hadi Abbass told Reuters. "We are ready to sacrifice our blood, soul and children for the president."

The United States has warned Iraq of unspecified consequences if it does not allow U.N. weapons inspections to resume. Iraqi diplomats have held three meetings with U.N. Secretary-General Kofi Annan this year to discuss the issue and related topics.

Vice President Dick Cheney said Wednesday that some U.S. officials believe Iraq could acquire nuclear weapons in the future. He also expressed skepticism that the return of U.N. inspectors, barred by Iraq since 1998, would solve the problem.

Eventually, Cheney said, the international community will have to "figure out how we're going to deal with this growing threat to peace and stability in the region and obviously potentially to the United States."

The CIA estimates Iraq is still several years away from a nuclear weapon, but that's what it said back in 1990, reports CBS News National Security Correspondent David Martin. It turned out that had it not been for the Gulf War, Saddam was only a year away from going nuclear. The Sept. 11 attacks convinced the Bush administration that is a mistake the U.S. can not afford to make again.

Saddam, 65, dressed in a dark suit behind a desk spread with white lilies, called on the United Nations to "honor its obligations" over sanctions imposed on Iraq after its 1990 invasion of Kuwait.

"The right way is that the Security Council should reply to the questions raised by Iraq and should honor its obligations under its own resolutions," Saddam said.

He was referring to 19 questions given to Annan at a meeting in March, and to council resolutions which say that U.N. sanctions on Iraq can be lifted once it has eliminated its weapons of mass destruction and fulfilled other requirements.

Iraq has long said it has fulfilled these conditions and that the sanctions should be lifted.

Annan circulated the 19 questions, which deal with various Iraqi complaints, to the Security Council members, who have not replied.

Saddam saluted Palestinians, who began an uprising in 2000 against Israeli occupation, and other Holy Warriors.

"Greetings ... to the Arabs in the forefront of whom come the heroic people of Palestine, and to every honorable warrior of the faithful who met his God with a pure heart," he said.

In an initial reaction to Saddam's speech, Israel said the Iraqi leader had broken no new ground.

Israel has expressed support for any military action the United States decides to take but many Israelis are concerned that Saddam would again target the Jewish state with Scud missiles as he did during 1991 Gulf War.

About 15,000 members of the "Jerusalem Army" marched through Baghdad shortly before the Iraqi leader's 22-minute address was broadcast. Dressed in khaki uniforms and carrying rifles, the marchers held up placards that said, "Long live Saddam!" and "Down with U.S.A!" Others carried photographs of Saddam or Palestinian and Iraqi flags.

"We reject the U.S. war threats and we are ready to face them," said Sabah Mohammed, a 45-year-old woman taking part in the march.

The government has organized similar demonstrations for the last week. The Jerusalem Army is a civilian force established by Saddam in 2000 with the aim of driving the Israelis out of Jerusalem and supporting the Palestinian uprising.

While members of the Bush administration and Congress have spoken openly about war with Iraq, it's not clear that a military effort to topple Saddam would have international support — particularly if Baghdad allows U.N. inspectors to return.

President Bush, committed to removing Saddam from power, has accused the Iraqi leader of being a menace to the region and the world.

"These are real threats and we owe it to our children to deal with these threats," Mr. Bush said in a speech at a high school in Madison, Mississippi.

"I promise you that I will be patient and deliberate, that we will continue to consult with Congress, and of course we'll consult with our friends and allies. We'll discuss these threats in real terms."

Mr. Bush added: "And I will explore all options and all tools at my disposal: diplomacy, international pressure, perhaps the military. But it's important for my fellow citizens to know that as we see threats evolving, we will deal with them."

Saudi Foreign Minister Prince Saud said Wednesday that his government is opposed to a U.S. strike on Iraq, and would not allow its soil to be used as a base for such a military action.

German Chancellor Gerhard Schroeder has warned that a U.S. attack on Iraq could wreck the international coalition against terrorism and throw the Middle East into turmoil.

A coalition of Iraqi opposition groups will present a unified stand when they meet Friday with State and Defense Department officials to discuss ways of deposing President Saddam Hussein, a dissident leader said.

Iraqi National Congress spokesman Sharif Ali, meeting with reporters Thursday, said he does not foresee any need for a prolonged U.S. military effort because support for Saddam among Iraqis has evaporated.

Ali suggested that victory for American forces over Saddam would come more easily than many suspect.

"The entirety of Iraq is opposed to Saddam Hussein," he said, mentioning specifically the Republican Guard units that are sometimes described as the backbone of his support.

Suggesting a speedy end to Saddam's regime, Ali said, "We do not believe it will require a great military effort."

He is expected to be joined at the State Department by five other INC leaders, all civilians, including the head of the London-based organization, Ahmed Chalabi. Representatives of Saddam's opponents from the Kurdish area of Iraq also will attend.

Ali is related to Iraq's last king and describes himself as a constitutional monarchist. He said the INC, which has suffered from factionalism in the past, will speak to the administration with a "united voice" during Friday's meeting.

The Iraqis will speak via secure video linkup Saturday with Vice President Dick Cheney, who is spending August at his Wyoming home.