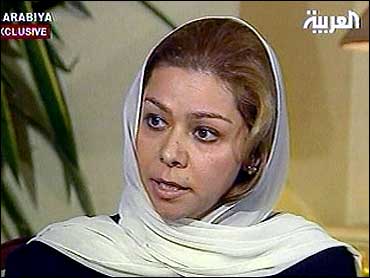 Saddam Hussein's daughters, in interviews Friday, expressed deep affection for their father but said they don't know where he is and last saw him a week before the Iraq war started.

Raghad Saddam Hussein and Rana Hussein, who received sanctuary a day earlier in Jordan, appeared relaxed as they spoke with CNN and the Arab satellite station Al-Arabiya at a royal palace in Amman, where they are staying with their nine children.

The two daughters had lived private lives and were seen by some as victims of Saddam, who ordered their husbands killed in 1996.

They described tearfully leaving Baghdad for a house on its outskirts the day the capital fell to coalition forces on April 9.

The sisters were poised but appeared to choke up somewhat as they talked about their family.

"He was a very good father, loving, has a big heart," Raghad, wearing a fashionable white headscarf showing part of her light brown hair, told CNN. Asked if she wanted to give a message to her father, she said: "I love you and I miss you."

"He had so many feelings and he was very tender with all of us," Rana said in the same interview. "Usually the daughter is close to her mother, but we would usually go to him. He was our friend."

They refused to discuss their brothers Odai and Qusai, who were killed in a shootout with U.S. forces in the northern Iraqi city of Mosul on July 22.

The daughters said they don't know the whereabouts of their father.

"Nobody knows where he is. Nobody tells me that," Raghad told CNN. "He's not going to tell anybody where he is now, even my mother."

In Iraq, U.S. forces grabbed two "important associates of the former regime" and a bodyguard suspected of protecting top Iraqi fugitives in raids in which they seized documents and photographs they hoped would help the search for Saddam.

Also, a new audiotape attributed to the former dictator urged Iraqis to join the anti-American insurgency and vowed Saddam would return to power "at any moment." The CIA said it was most likely authentic.

The military did not identify the captives taken in Saddam's hometown of Tikrit.

"I think it does bring us closer," to capturing Saddam, Lt. Col. Steve Russell said. "We believe the information they may possess will further help destroy the regime."

To help U.S. troops track him down, the U.S. military on Friday released several digitally enhanced photographs of Saddam, showing what he might look like if he changed his appearance. Two photos show him with a heavy black beard. In one his face is framed by a headscarf. Others show him with grey hair.

Saad Silawi, one of two Al-Arabiya interviewers, said Raghad, who cried at the end of the segment, told him she did not want to answer questions about her father and brothers and that criticism of Saddam would make her acquaintances lose respect for her.

Before arriving in Jordan, Raghad and Rana had reportedly been living in humble circumstances in the Iraqi capital, Baghdad, since their father's ouster.

Unlike their brothers, the two women were not believed to be wanted for crimes linked to their father's brutal regime. After Saddam ordered their husbands killed in 1996, many saw the sisters as victims of their father's tyranny.

Raghad told Al-Arabiya that the swift fall of the Iraqi capital came as a "great shock" and she blamed it on a betrayal by associates of the deposed leader.

"With regret, those my father trusted, whom he had put his absolute confidence in and whom he had considered on his side — as I understood from the newspapers — betrayed him," Raghad said.

She did not say who betrayed Saddam in the portion of the interview broadcast.

Rana said she last saw her father a week before the war started, but Raghad told al-Arabiya that she saw her father five days before the conflict at a family gathering at her mother's residence in Baghdad's Al Jadirya district.

She said Saddam did not expect Baghdad to surrender. "Never, never, he never expected anything. On the contrary, I was depressed, but when we met I felt I retained strength from him and that my fears were much more than the reality (deserved)."

"As usual, he was strong, full of confidence in God that everything will be OK," she said.

She did not remember the last words he said, but said Saddam was "very normal" during the one-hour gathering. He brought sweets for the grandchildren, who were eager to sit next to him.

Raghad said she spent the night before Baghdad fell listening to the radio in the upscale Mansour district of the Iraqi capital in the company of Rana and their children.

At noon the day Baghdad fell, Rana said her father sent a car from the special security forces, "who told us to leave." She said Qusai's wife and children were with them.

"The boys were hugging each other and crying," Rana said. "We left Baghdad. Then I met my mother after a few hours and Hala (younger sister)."

She said they were put in a house on Baghdad's outskirts. "There was almost no link with (my) father and brothers because everything was over."

A teenage son of Qusai's was killed in the shootout in Mosul, but it was not clear if he was among those at the meeting she described.

Saddam and his wife, Sajida Khairallah Telfah, had three daughters and two sons.

Saddam also had a very public affair with Samira Shahbandar, daughter of a prominent Iraqi family, who has been described as his second wife. They were believed to have a son, Ali, who would be Saddam's youngest son. Ali kept a low profile.

Raghad said they hope to stay in Jordan.

"For the first time for four months now, since the war started, this is the first day I put my head on the pillow and I feel at peace," she told CNN. "I'd love to stay in Jordan. I'd like to stay here for the rest of my life."