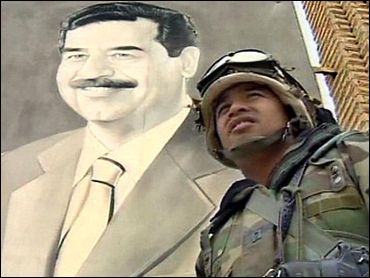 As U.S. troops braced Thursday for fresh attacks on a key anniversary in his rise to power, Saddam Hussein's voice was again heard over the airwaves.

A speaker purported to be the deposed Iraqi leader denounced Iraq's newly formed Governing Council in an audiotape aired on Al-Arabiya satellite television.

The reference to the council, which was formed by U.S. administrators and met for the first time on Sunday, indicated the message was new.

The tape, which reporters familiar with Saddam's voice said sounded authentic, aired for about five minutes. There was no way to independently authenticate that the voice was the ousted Iraqi leader's.

Thursday was the anniversary of the 1968 Baathist revolution that brought Saddam's political party to power. Saddam himself seized power 11 years later. U.S. commanders have worried that Thursday and other anniversaries in July might spark intensified attacks on American troops.

Rumors have spread quickly among the Iraqi public that Saddam would make some sort of appearance on the anniversary.