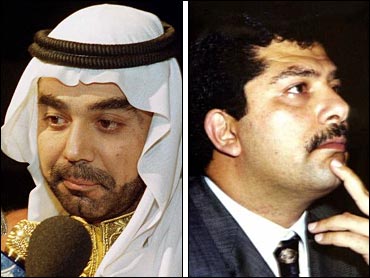 Saddam Hussein's sons Odai and Qusai were killed in a six-hour firefight Tuesday when U.S. forces surrounded and then stormed a palatial villa in the northern Iraqi town of Mosul, a senior American general said.

"We are certain that Odai and Qusai were killed today," said Lt. Gen. Ricardo Sanchez at a news conference in Baghdad. "The bodies were in such a condition where you could identify them."

Odai and Qusai ranked second only to their father in the deposed regime. They were Nos. 2 and 3 on the U.S. list of 55 top former Iraqi officials wanted by Washington. The United States had offered a $25 million reward for information leading to Saddam's capture and $15 million each for his sons.

Asked whether the killing of the sons would reduce the incessant attacks on American forces, Sanchez said he thought the security situation now would improve.

"I believe very firmly this will have an effect. This will prove to the Iraqi people that these two members of the Iraqi regime will never come to power again," Sanchez said.

Hours after the raid in Mosul, gunfire erupted throughout Baghdad, making travel very dangerous. The shooting was believed to be celebratory as news of the killing of the sons spread through the capital.

"It's probably very appropriate that they would be celebrating about now," Sanchez said.

Fighting broke out after soldiers from the 101st Airborne Division surrounded the stone, columned villa.

When troops approached the building, gunmen inside opened fire with small arms. The "suspects barricaded themselves in the house" and "resisted fiercely," Sanchez said.

"They died in a fierce gunbattle," Sanchez added.

After the firefight, about 1,000 people gathered, some expressing delight, others cursing the Americans.

The soldiers removed four bodies and did not let photographers near enough to take pictures.

Some Mosul civilians appeared to have been caught in the crossfire. It was not known how many people were injured, but several were taken to a hospital.

Officials gave conflicting reports on whether anyone was captured during the assault. The officials said they had no initial information that would suggest Saddam was present during the raid.

Experts conducted DNA tests after the bodies were flown from Mosul to another location, officials said.

He was described as quiet and level, particularly compared to Odai, Saddam's eldest son, who had a reputation for brutality and flamboyance. Odai controlled Saddam's Fedayeen, the paramilitary force that fought U.S. troops during the war; many of its survivors are thought to be part of the ongoing guerrilla campaign in Iraq.

Odai also controlled information and propaganda in Saddam's Iraq, and was chairman of the country's Olympic committee.

Saddam has a third, younger son, according to some reports, and three daughters. All kept a low profile in his regime.

Mosul, a town 240 miles northwest of Baghdad that housed Iraqi army bases, is outside the so-called "Sunni Triangle" in central Iraq home to much of the remaining support for Saddam, a Sunni Muslim who used his Baathist Party to oppress the country's Shiite majority.

The triangle is also a center of anti-American resistance: In the latest attack, Tuesday, a U.S. soldier was killed and another wounded in an ambush along a dangerous road north of Baghdad. His death brought to 153 the number of U.S. troops killed in action since the March 20 start of war, six more than during the 1991 Gulf War.