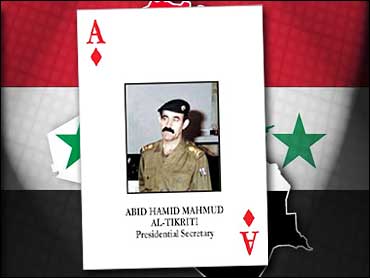 U.S. forces have captured Saddam Hussein's top aide and presidential secretary, a man who American officials believe knows the fate of the deposed Iraqi leader and has information about banned weapons.

Abid Hamid Mahmud al-Tikriti was No. 4 on the U.S. most-wanted list of Iraqi leaders, behind only Saddam and sons Qusai and Odai. He is the ace of diamonds in a deck of cards U.S. intelligence developed to help find Saddam's top henchmen.

CBS News National Security Correspondent David Martin says Mahmud, who functioned as part bodyguard, part chief of staff, was the man who knew where Saddam was at all times and the man U.S. officials are certain knows where all the bodies and all the weapons of mass destruction are buried.

He was captured near Saddam's hometown of Tikrit in a series of raids that turned up evidence that American forces are closing in on Saddam himself.

In a video conference with Pentagon reporters, Odierno said his troops also discovered a large amount of cash he believes was used to reward Iraqis for killing Americans: "$8.5 million, 300 million to 400 million Iraqi dinars and English pounds and Euros yet to be counted. In addition, we seized a large cache of jewels and gems estimated over a million dollars of value."

Mahmud surely knows whether Saddam is alive or dead and probably knows where to find him, says Martin. But if he's like all the other regime leaders now in custody, he won't talk.

"These guys are tough," a Pentagon official said. "They haven't broken lock."

As Saddam's presidential secretary, Mahmud, 46, controlled access to the president and was one of the few people he is said to have trusted completely, U.S. officials said, speaking on the condition of anonymity.

Intelligence reports indicate that Mahmud determined which diplomats, media and even doctors could see Saddam. Only the two sons could see the Iraqi president without going through Mahmud.

Qusai, in particular, avoided befriending Mahmud so Saddam would not think they were conspiring against him, one defense official familiar with intelligence information said.

A distant cousin of Saddam, Mahmud, started his career as a noncommissioned officer in Saddam's personal guard and was eventually promoted to the rank of lieutenant general. In the 1990s, he was put in charge of several security portfolios, including responsibility over places Iraq has been accused of hiding weapons programs.

U.S. officials have said they want to try Mahmud for war crimes or crimes against humanity for activities associated with his senior position in the Iraqi government.