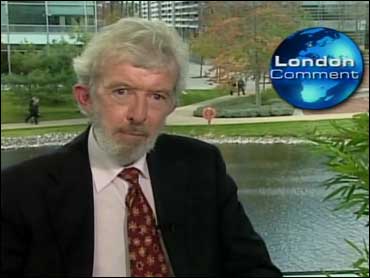 Things could not have been worse for America or Britain. Banks were collapsing in spite of international efforts. The world's stock markets jittered towards meltdown. Even ultra cautious Englishmen started taking their savings out of the vaults to stick under the bed. Better safe than sorry.

But then, along came Gordon. Gordon the invisible. Gordon the dour. Gordon Brown, the un-charismatic Scot, who is Prime Minister of this country and whose popularity here had been at an all-time low. He was and remains the most unlikely superhero. But it was his idea to back the British banks by, effectively, purchasing a huge stake in them. It was emergency nationalization. It was extraordinary.

Socialism fell out of fashion years ago. They tried it in the Soviet Union, but it never really caught on. Gordon Brown, however, recognized that it was the only thing that nobody had tried. So he gambled. And, fingers crossed, and panicky markets permitting, it seems to have saved the international banking system from complete collapse.

Miracles get mimicked. Even your Mr. Paulson was then forced to change direction and copy the policy, and pretty well every other nation is now dipping into its own coffers to "do a Gordon."

Dull Mr Brown is now being beatified by the very same people who considered him a no-hope buffoon just a few weeks ago. His political stock is on the up, because, like the markets, it couldn't have fallen much further. His interpersonal skills may still be lacking. His ability as an inspiring orator will always be absent. But if he has stopped the world crashing into an abyss then maybe he deserves to be canonized.

Meanwhile, on Main Street, unemployment levels are rising. We are in for industrial failures, companies going bust, lean times to come. There ain't no quick fix for a recession. The markets may still slide more. But one day, long after the British electorate has dispensed with his services, there may be a little place in economic heaven reserved for Saint Gordon.
by Ed Boyle