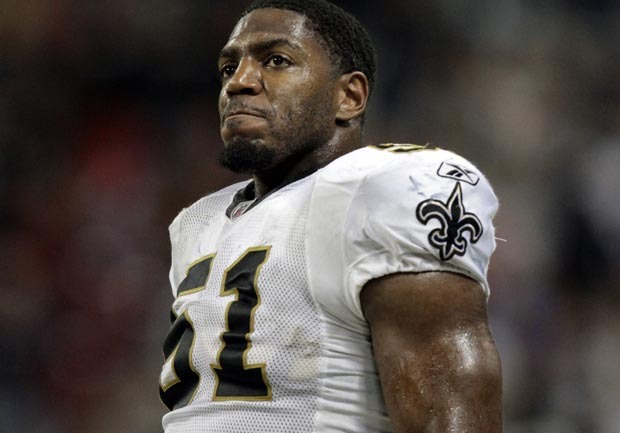 The suit in U.S. District Court in New Orleans claims Goodell has made false statements about Vilma while discussing the NFL's bounty investigation of the New Orleans Saints.

Goodell has said Vilma was a leader of the team's bounty program that put up thousands of dollars for big hits on opposing teams' star players from 2009-11, including on then-Arizona quarterback Kurt Warner and then-Minnesota quarterback Brett Favre during the playoffs in 2010.

Goodell has suspended Vilma for the entire season. Vilma and three other players who received shorter suspensions — defensive end Will Smith, defensive lineman Anthony Hargrove and linebacker Scott Fujita — all have appealed their punishments. Hargrove now plays for Green Bay while Fujita is with Cleveland.

"We have not yet reviewed the filing," NFL spokesman Greg Aiello said. "However, our commitment to player safety and the integrity of the game is our main consideration. We recognize that not everyone will agree with decisions that need to be made."

Vilma's lawsuit, which is expected to be heard by Judge Ginger Berrigan, asks for unspecified monetary damages.

CBSSports.com's Mike Freeman says the lawsuit makes Vilma come off as a "crybaby." "This is another example of why the Saints are in the position they're in. They did it. They did the bounties. But they don't want to admit they did it and they don't want to serve their punishment for the crime," Freeman writes.

The players' association has said that the league has refused to turn over what the union would view as hard evidence that Vilma or the other sanctioned players tried to intentionally injure targeted opponents or sponsored such behavior on the field.

Ginsberg has echoed those complaints and said the federal lawsuit could force the NFL's hand.

"It is certainly the case that in court, Jonathan will have a right to see whatever it is that Commissioner Goodell has been hiding from us and what Commissioner Goodell contends gave him a basis to make these false allegations," Ginsberg said. "We will have a fair and neutral judge to preside over the dispute rather than contending with the executioner also being the person making the final decision."