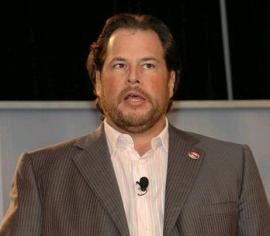 Salesforce.com CEO Marc Benioff was on his game Thursday, calling Chatter the company’s killer app, touting business wins in Japan and saying a Siebel upgrade from Oracle is an opportunity for Service Cloud. But his biggest zingers were saved for Microsoft and its patent lawsuit.

Let’s roll the transcript. Benioff was asked about Microsoft’s lawsuit and whether it had any impact on Salesforce.com’s business. Technically, Benioff was just asked about “the lawsuit,” but it was clear that the Microsoft patent move was the subject. Benioff said the lawsuit wouldn’t derail the company’s focus and added:

I should just say right off the bat, we can’t comment on pending litigation. The reality is that these patent trolls are unfortunately just part of doing business and technology these days. They’re basically the alley thugs. Every thriving economy has alley thugs and we do too. And that’s fine. You know?

Personally, I’m just disappointed to see this from a former leader of our industry, but it’s eminently resolvable and it’s not material to our day-to-day business. It’s basically a no-impact situation. It’s not something that I think anyone needs to make anything of.

I think it probably has more ramifications for other cloud vendors than it honestly does for us because we’re so — we’re strong. And a lot of other cloud CEO’s have been contacting me and my heart goes out to them. Because I feel like that’s the real impact is that if you go through it, you can see where this is going. And there’s obviously a next step here and it’s not about us, it’s about others.

Benioff’s comments came following Salesforce.com’s first quarter results. The results were on target, but the outlook was disappointing relative to Wall Street estimates. Benioff said it was time to invest in future growth. Simply put, Salesforce.com’s fiscal 2011 outlook was light. In fact, the Jigsaw purchase is going to shave about 11 cents a share from fiscal year earnings. If you add that earnings hit back, Salesforce.com is closer to Wall Street’s annual earnings expectations of $1.28 a share, but still 2 cents a share to 4 cents a share short of expectations.

Among the other key highlights from Salesforce.com earnings call:

Chatter is seen as Salesforce.com’s killer app and a collaboration as a service engine. Benioff says Chatter to Salesforce.com is what the database was to Oracle. He added that Chatter could eventually get Salesforce.com to 10 million users, up from 2 million to 3 million today. Benioff added that the Chatter beta now has more than 1,000 customers and is the company’s first enterprise-wide deployment.

Benioff touted a few business wins—including against Microsoft, which was called a patent troll. He said:

We continue to achieve this success by beating the biggest, most important software companies in the world, against Oracle this quarter, we won significant new or add-on business at Informatica, Sony Ericsson, Symantec, MasterCard, GAustralia, Motorola. Here in Japan, we beat them at Canon and Fujitsu, two of the most important companies in the country; [for] Pitney Bowes, AXA and Waste Management. And against an unnamed patent [troll], we won business at Abbott Labs, Mercury Insurance, Ingram Micro, Austin Ventures, and Salient Surgical. And finally, while SAP struggles to redefine itself, we won business against them at Haagen-Dazs, Carestream and NVIDIA.

On Service Cloud, Benioff also took a shot at Oracle’s Siebel. “Service Cloud has seen triple digit growth. It’s a hot market. It’s a market that has not been refreshed by the traditional enterprise technology vendors,” said Benioff. “We view it very much as a greenfield opportunity. A lot of those customers
who are using products like Siebel 7.8, they have to make a tremendous decision to upgrade to Siebel 8, which is a huge new mega piece of software and architecture customizations — everything is new.