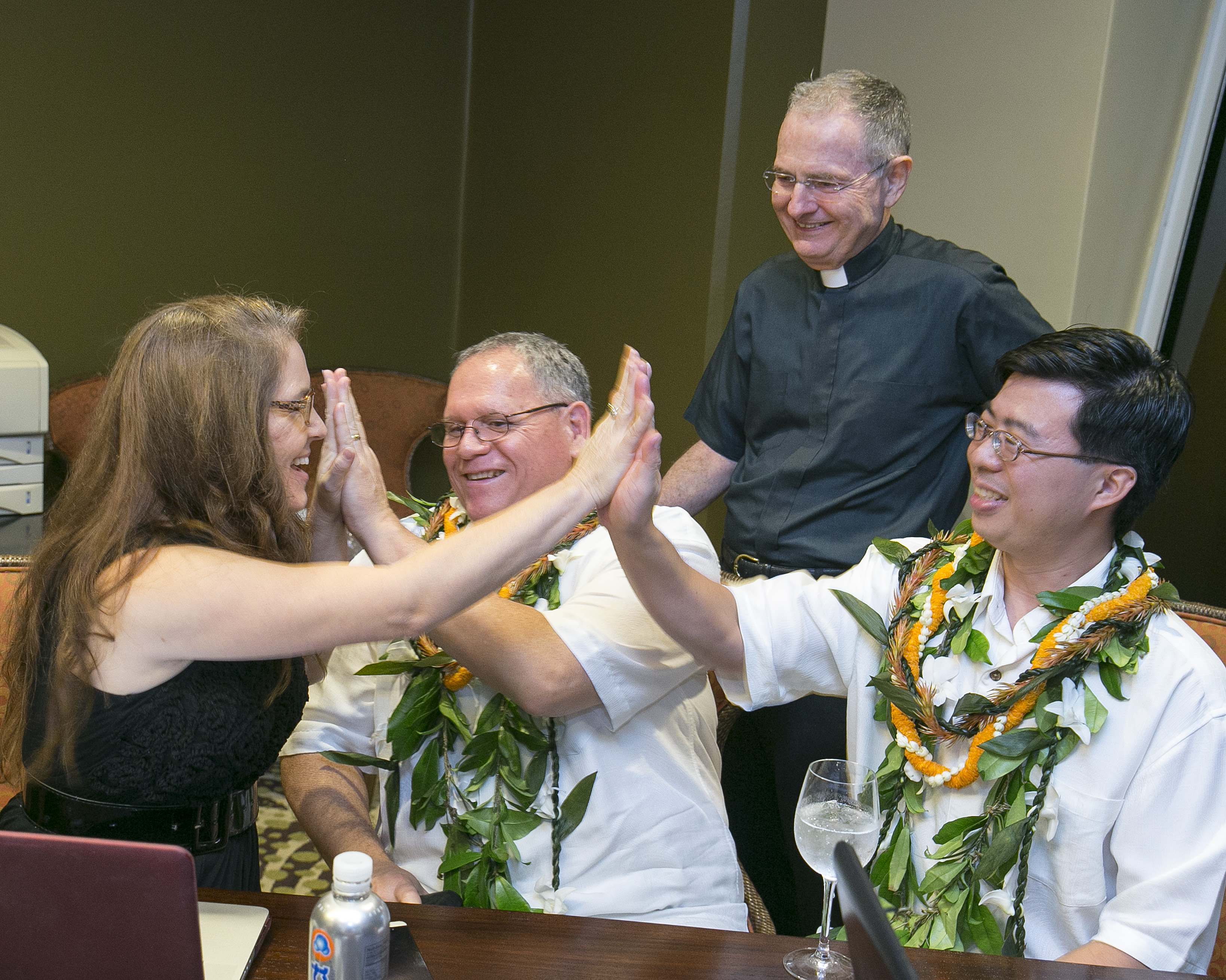 HONOLULU -- Six same-sex couples tied the knot in Hawaii early Monday, moments after a law granting them the right to do so took effect in the state often credited with starting the national gay marriage debate.

Even more couples watched and waited their turn at the Waikiki resort.

Across town, an openly gay Unitarian minister wed his partner of 15 years in a ceremony attended by clergy who pushed for the new law, plus Gov. Neil Abercrombie, who called the special legislative session that led to the law.

"It's about making that commitment to the person that I want to spend the rest of my life with," said Saralyn Morales, moments after cutting a small wedding cake after marrying her partner, Isajah Morales.

Hawaii's gay marriage debate began in 1990 when two women applied for a marriage license, leading to a court battle and a 1993 state Supreme Court decision that said their rights to equal protection were violated by not letting them marry.

That helped lead Congress to pass the federal Defense of Marriage Act in 1996, which denied federal benefits to gay couples. The U.S. Supreme Court struck down part of the act this year.

An additional 14 states and the District of Columbia also allow same-sex marriage. Illinois was the 16th state to legalize it, and the law takes effect June 1.

Hawaii's marriage laws allow couples to register for a license and be married the same day, a process conducive for tourists only in the state a short time.

Couples can sign up for a license online, then be verified by any license agent throughout the state. Agents have set up shop throughout the islands, from resorts on Maui and the Big Island to hard-to-reach places on Kauai.

Saralyn and Isajah Morales began filling out license applications a few minutes after midnight along with other couples. Several license agents huddled around four laptops in a tiny conference room, refreshing their web browsers to coax a state-run website to load.

A few feet away, wedding guests sipped champagne, dined on curried shrimp and portabella mushroom sliders, listened to piano music and took pictures with each of seven cakes on display for the occasion.

Couples who walked in to register on the spot posed with a three-tiered centerpiece cake, adorned with pink and white roses.

"Next!" Keola Akana exclaimed after being the first of the group to complete the license application with his groom, Ethan Wung.

An estimate from a University of Hawaii researcher says the state will get a $217 million tourism boost over the next three years as a result of gay marriage.

A CBS News/New York Times poll conducted earlier this year shows a slim majority of Americans say it should be legal for same-sex couples to marry.

Fifty-one percent of Americans nationwide said they support the cause, according to the poll, conducted May 31-June 4, while 44 percent did not.