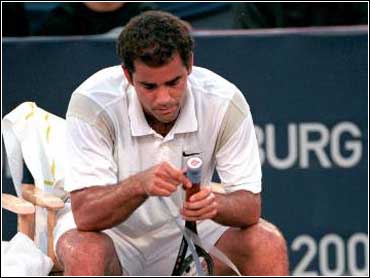 There isn't going to be a rematch of this year's Wimbledon final between Pete Sampras and Patrick Rafter at the $2.95 million Tennis Masters Series-Canada.

"It's a tough loss," Sampras said. "I feel like I played well enough to win. But it wasn't meant to be."

The loss came after an ailing Rafter fell apart after winning the first set in a 3-6, 7-6 (1), 6-2 quarterfinal loss to Jiri Novak of the Czech Republic.

Safin faces world No. 31 Wayne Ferreira of South Africa in one semifinal Saturday. Qualifier Harel Levy of Israel will face No. 55 Jiri Novak of the Czech Republic in the other.

Before a decidedly pro-Sampras crowd on Centre Court, Safin dominated with his serve and tested Sampras' backhand.

The players broke each other's serve only once, which led to the third-set tiebreaker. Safin was up 4-1 in the tiebreaker before Sampras rallied. The American had match points at 6-5 and 7-6 but ended up losing 10-8 on a double-fault - his second of the tiebreaker.

"When you're serving for the match and you give it away you're not going to be in the best of moods," Sampras said. "I didn't serve all that well tonight."

Sampras has not won in six tournaments in Canada, dating to his first visit in 1990.

Rafter, who revealed after his match that his right shoulder has been sore all week, said he was withdrawing from next week's Tennis Masters event in Cincinnati.

"This shoulder thing is very, very sensitive. Very delicate," said the 14th-seeded Rafter, visibly concerned by his recurring injury. "I've played so much tennis now that it's become fatigued."

The stunning loss before a packed crowd on Centre Crowd was only the second in 18 matches for Rafter, whose last defeat was to Sampras in the Wimbledon final on July 9.

"I have to go back to the drawing board, and the only way to do that is by taking time off," the Australian said.

The 27-year-old Rafter underwent right rotator cuff surgery in October and returned to play in February, highlighted by his Wimbledon final appearance.

"It's not getting any better. In fact, it's getting worse," he said. "I have to take time off now if I'm going to be ready for the U.S. Open."

Novak chased down almost every shot by Rafter and rifled forehand passing shots dow the line.

"I think the tiebreaker was the key of the match," said Novak. "It gave me a lot of confidence."

Rafter, the 1998 Canadian Open champion and two-time U.S. Open winner, had 36 unforced errors to Novak's 13. Rafter bounced his racket off the ground and hammered a ball into the crowd in disgust after dropping his serve in the third set.

In another upset, fifth-seeded Kafelnikov, a finalist last year in Montreal, looked uninspired in a 6-3, 7-6 (1) loss to Ferreira, his doubles partner.

Ferreira won eight of the first 11 games in the match, then closed out the victory with three aces in the tiebreaker, including match point.

"In that tiebreaker, it was the best I've served in many, many years," said Ferreira, whose last singles title was the 1996 Canadian Open - a stretch of 92 tournaments.

Levy, the first qualifier since 1983 to reach the quarters in Canada, clinched his first semifinal berth on the ATP Tour.

"I just arrived from Davis Cup in Bulgaria, which we played on clay courts, so I wasn't prepared as well," said Levy, who turns 22 on Saturday. "I didn't play so well in the qualifying, but got through, and have been improving every match."

The loss ended an impressive run by the 26-year-old Golmard, who stunned top-seeded Andre Agassi in the first round and upset the fiery Marcelo Rios of Chile in the third round.