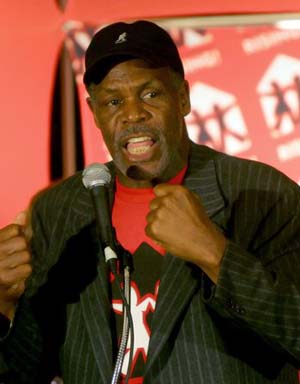 Trying to win the one Grand Slam title to elude him, Pete Sampras escaped the first round in five sets today against a player who had never won a match in a major tournament.

The top women had a far easier time than Sampras, with Steffi Graf, Monica Seles and Lindsay Davenport all advancing with no trouble.

Also winning was Jennifer Capriati, just days after she won her first title in over six years, and Anna Kournikova.

His legs cramping, Sampras double faulted at two key points including at match point in the fourth set. He appeared headed toward early exit in Paris once again, similar to his second-round loss last year to No. 97 Ramon Delgado of Paraguay.

As he has so many times at the French, Sampras came up against a player with nothing to lose, when he himself was clearly not at his best.

Sampras double-faulted on set point before losing the first-set tiebreaker.

But after coming back to take the next two sets, the fourth turned into an uphill fight, with the crowd trying to pump him up, yelling "Allez, Pete!" Between points, Sampras knelt low to loosen his leg muscles.

As Sampras' fans groaned, Marin built a 6-3 lead in the tiebreaker. Sampras saved three set points to reach 6-6, then saved a fourth to get to 7-7.

A service winner gave him match point at 8-7, and it appeared he'd won a long rally with a crosscourt winner. But Marin fired a backhand down the line to save the match. The crowd gave the Costa Rican a standing ovation as he raised his arms in triumph.

Sampras had another match point at 9-8, but he double-faulted for 9-9, then netted a volley for 10-9, giving Marin a minibreak and a set point. Sampras then hit a forehand approach shot that he thought was good but was ruled wide, giving Marin the set. Sampras was booed when he contested the call.

In the deciding fifth set, Sampras went up a break for 2-0, but Marin converted on his second break point in the next game to bring the players back on serve at 2-1.

With Marin serving at 3-4, Sampras had a break point, but failed to convert. He finally won the match when he broke Marin at 5-4, his first match point in the fifth set.

Graf, a five-time champion at the French, was making her 16th appearance on the red clay of Roland Garros, where she hasn't lost before the quarterfinals in her last 12 tries. She had to skip the French Open last year because of one of her many injuries.

After beating Magdalena Maleeva 6-2, 6-0, Graf said she isn't convinced she can regain the form that brought her 21 carer Grand Slam titles.

"Do I believe I can do it? I think I can, you know," she said. "I probably just need to believe in it a little more."

Seles, seeded third and a three-time winner at the French, won 6-2, 6-4 against Fang Li of China.

When asked about last year's loss in the finals to Arantxa Sanchez Vicario, she said: "Thank goodness my memory is not long. That day was very difficult. I tried to learn from it."

With an affectionate crowd behind him, former French Open champion Gustavo Kuerten powered his way into the second round with a straight-set victory over Galo Blanco of Spain.

Kuerten has been having the best year on clay of anyone on the tour, and it showed in his methodic victory, with sharp groundstrokes punctuated by delicate drop shots.

French fans are especially fond of the Brazilian they call "Guga," the surprise winner of the 1997 title in Paris.

Another Aussie, Mark Philippoussis, lost to countryman Jason Stoltenberg 7-6 (7-4), 6-4, 6-1. No. 16 Thomas Enqvist of Sweden advanced, as did his compatriot Magnus Larsson, who scored a minor upset over No. 11 Karol Kucera of Slovakia.