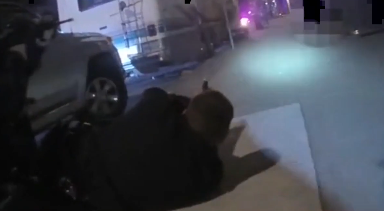 San Francisco police said the man inside the RV was the suspect accused of shooting two men, one fatally, in Golden Gate Park's Panhandle on Feb. 16. The murder victim is a 28-year old man.

Police said the suspect, Joel Armstrong, carjacked a vehicle to get away. They tracked him to Alameda and De Haro streets near the San Francisco Design Center. He refused to come out of the RV after repeated orders.

Three people and a dog emerged, but the suspect stayed inside.

The officers fired back.

According to the police report released Tuesday night, seven officers fired 65 shots. The suspect fired two shots. That's a total of 67 shots and nobody was hit.

Two hours after the standoff began, Armstrong emerged and was immediately arrested.

Armstrong is facing charges of murder, carjacking and eight counts of attempted murder.