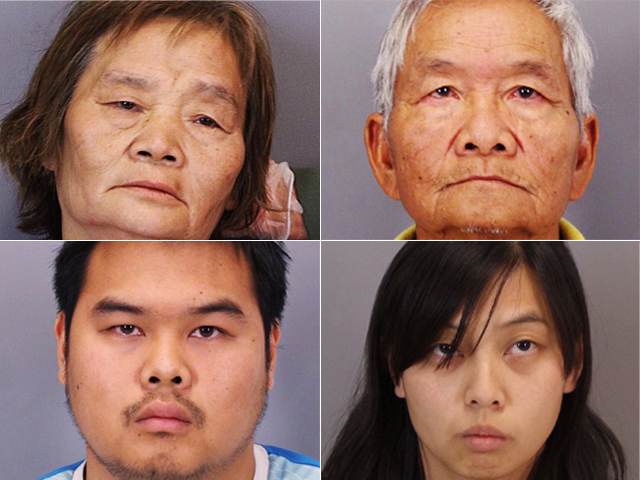 (CBS/AP) SAN FRANCISCO - Four of five family members accused of beating and starving handicapped adults under their care in an upscale California home were taken into custody Monday after a court appearance.

An arrest warrant has been issued for a fifth suspect, Kathy Le,  authorities said.

Earlier this month, the five suspects were charged with dependent adult abuse and animal neglect, both felonies.

Authorities say inside a two-story stucco home in an upscale San Jose neighborhood, disabled adults were beaten, starved and not even allowed to use toilet paper.

The victims, mostly Vietnamese immigrants who speak little English and are unable to tend to themselves, lived among rotting food and more than two-dozen dogs whose pools of urine and feces littered the home, authorities said.

"The conditions were pretty deplorable," Santa Clara County Assistant District Attorney Charles Huang said Monday. "The general impression was that the dogs appeared to be better off than the victims."

The relatives could spend up to 18 years in prison, if convicted. Police said they learned about the house owned by George Nguyen's son from a victim's relative in May. Officers found that the residence reeked of dog feces, the refrigerator had locks on it and there was no running faucet water, Huang said.

Investigators say the alleged victims - many suffering from schizophrenia and other disorders - told them that they were not always given their medication. They were kept in small rooms virtually all day and their Social Security checks were being taken by the suspects.

Outside, the home featured tall mesh fencing and a handful of surveillance cameras on site.

"It doesn't appear the victims were free to go about in the house," Huang said. "There was excrement and urine virtually all around the house. That was a very troubling issue."

In May, police removed the victims and placed them under protective custody at a licensed care center. However, allegedly someone checked a handful of the victims out of the hospital and returned them to the house, along with 21 dogs, for about a month.

Again, police arrived at the home and removed three victims and the dogs on July 2, Huang said.

"I don't know what their motivations were upon returning," said Huang, adding that the investigation into the case is still in its early stages.

The suspects are due back in court on Aug. 21.