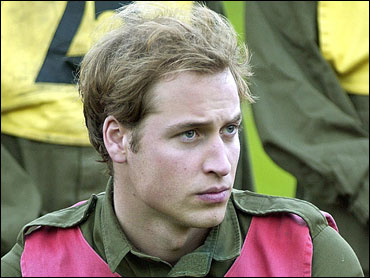 The second in line to the British throne, Prince William, arrived to begin nearly a year of military training Sunday with the first in line, his father, Prince Charles.

And while William isn't supposed to get any special treatment at Sandhurst, the elite military academy, that exercise in royal democracy may have to wait,

Someone else carried the prince's mandatory ironing board and bags.

But the training regime promises to get tougher.

William joins his younger brother, Harry, at the Sandhurst officer training college. But unlike Harry, who should get his officer's commission in the spring, William isn't necessarily looking to a military career, Phillips points out. For him, Sandhurst is another box to be ticked on the long, long road to the throne.

"I haven't actually set my mind on anything yet, but … there are plenty of possibilities that are open," the prince said in November 2004.

And, notes Phillips, he should have plenty of time to explore them all. It will likely be decades before he's called on to replace his grandmother, Queen Elizabeth, at the head of the British royal family. Still, he remains the Royals' great hope.

"If you think of it in NFL terms," suggests royals reporter Dominic Diamond, "the queen is the starting quarterback; you've got your backup, which is Charles; you know that he's not that good, so, basically, the first round draft pick is William."

And, as he's already been proving, it's a long training camp.

Asked how it's going so far, William replied, "Very good."

"Trying to," he said as he took part in an early ropes exercise.