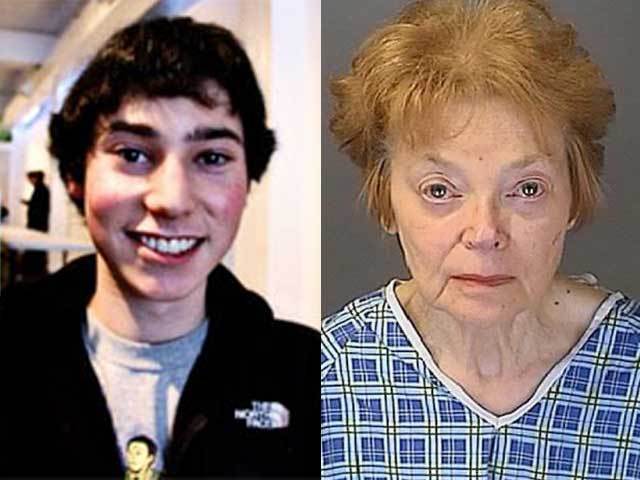 (CBS/AP) BLOOMFIELD TOWNSHIP, Mich. - A Michigan judge ruled Sandra Layne will stand trial on murder and weapon charges during a Monday hearing in which the 74-year-old grandmother was accused in the shooting death of her 17-year-old grandson, Jonathan Hoffman.

Tapes of Hoffman's emergency call to 911 were played publicly for the first time during Layne's hearing. Layne allegedly shot her grandson repeatedly on May 18 at the West Bloomfield Township condo that she and her husband shared with the teen.

The operator tries to keep the boy on the line, and a few minutes later, Hoffman began speaking again.

"I got shot, shot again. Please help. Help," he said, as a woman's shouts are heard in the background.

Officers arrived at the scene and heard three shots inside the home before they yelled for anyone inside to come out, Officer Derrick Kassab testified.

Kassab said Layne emerged from the condo with her hands raised and screamed, "I murdered my grandson." He said Layne was "hysterical" and kept asking officers how her grandson was doing.

Kassab was among several officers called to the stand during Monday's hearing, and their testimony revealed a bloody crime scene. Police found blood on the floors and walls, and Hoffman lying on the floor on the second floor of the home, Sgt. Joseph Spencer testified.

Nine spent cartridge cases also were found in the house. In the master bedroom, investigators found ammunition for a 9 mm handgun, a magazine and speed loader for a magazine on a tray.

Deputy medical examiner Ruben Ortiz-Reyes testified that Hoffman was shot five times, including three times in the chest. The teen had traces of synthetic marijuana in his urine, tests showed.

After the hearing, Layne's attorney said his client acted in self-defense.

"This was a child who was dumped on her," defense attorney Jerome Sabbota said. "She killed a person she loved who she was trying to save."

Hoffman, a senior at Farmington Central High School, had had at least two run-ins with police. Court records show he was pulled over on March 17 in nearby Farmington Hills and ticketed for possession of marijuana and drug paraphernalia. He later received a 93-day suspended sentence and was placed on 12 months' probation.

On March 21, West Bloomfield Township officers responded to complaints outside Layne's condo. When they arrived, Jonathan was outside. Layne told police she was having a hard time because her grandson was very upset and yelling. No arrests were made that day.

"If you listen closely to the 911 tape, he's grabbing onto her and he's holding her. He's not letting her go," Sabbota said Monday.

Layne could face up to life in prison if convicted of the murder and weapon charges. Sabbota told CBS Detroit Jonathan's death can't be isolated by one day, saying people shouldn't think as if Layne suddenly grabbed the gun and shot her grandson on May 18.

"There are many factors which caused the shooting," Sabbota told CBS Detroit. "There were things that led up to it, things that created the fear in her mind, based upon how he was behaving."

Sabbota said it's a case where nobody wins, saying Layne took care of her grandchild that she loved and that nothing will take away her horror.

Hoffman had been living with his grandparents to finish high school since his divorced parents had moved out of state. Hoffman's father, Michael Hoffman, has said he and his ex-wife were not aware of problems between the teen and his grandmother.