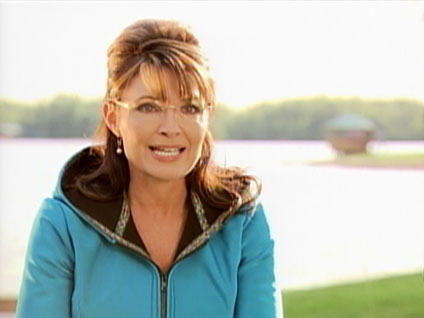 In a just-released New York Times Magazine cover story, Sarah Palin responds "I am" when asked if she is considering a run for president.

"I'm engaged in the internal deliberations candidly, and having that discussion with my family, because my family is the most important consideration here," Palin is quoted as saying.

She goes on to argue that the major potential Republican candidates are largely alike when it comes to policy - "but in fact there's more to the presidency than that."

Should she run, Palin tells author Robert Draper, "I'd have to bring in more people -- more people who are trustworthy" into her inner circle. Palin has only about ten advisers (most of whom did not know her before two years ago) and has built up little in the way of infrastructure for a run, unlike likely GOP candidates Mitt Romney and Tim Pawlenty. (Here, via Politico, is the cover image for the story, which shows her advisers.)

A number of top Republicans are reportedly discussing how to stop a Palin presidential run for fear that the polarizing former Alaska governor will lose badly against President Obama in a general election should she secure the nomination.

Palin acknowledges in the story that unlike some other candidates, she would have to prove her record "right out of the chute."

"That's the most frustrating thing for me - the warped and perverted description of my record and what I've accomplished over the last two decades," she tells Draper. "It's been much more perplexing to me than where the lamestream media has wanted to go about my personal life. And other candidates haven't faced these criticisms the way I have."

Because of the unfairness of the media toward her, she adds, "I fear for our democracy."

In the story, a Palin friend suggests that she could improve public perceptions of her if "when she starts doing the debates during the primaries, she knocks it out of the park."

"That would cause an entirely different view of things, wouldn't it?," he says.

In a seperate interview with ABC's Barbara Walters, Palin also said she is considering a run.

Palin told Walters she believed she could beat President Obama if she does run.

The former Alaska governor says in the Times story that while she has declined most media requests except with Fox News, where she is paid as a contributer, she hasn't been avoiding discussion of her positions.

"I'm not avoiding anything or anybody," she says. "I'm on Facebook and Twitter. I'm out there. I want to talk about my record, though."

The story quotes White House Press Secretary Robert Gibbs complaining that he is frustrated by a situation in which Palin posts a provocative comment online and then the White House press corps becomes focused on it.

"Now, I could say, 'You know what? I'm not going to deal with that,'" Gibbs says. "And big headline: Palin Accuses Obama of X. The White House Had No Comment."

Palin also says in the story she is as qualified as Mr. Obama for the job.

"If I had any doubt in my ability or administrative experience that would've been put to good use in a McCain administration, then I never would have accepted the nomination," she says.

Draper writes that Palin, then the GOP's vice presidential nominee, pushed to make more media appearances during the 2008 presidential campaign than she ultimately made. He also describes her as seen as thrifty within the campaign when it comes to her wardrobe - contradicting the perception left by reports that Republicans had spent lavishly on clothingfor the then-candidate and her family - and says she "was seen more than once passed out on her hotel bed half-buried in briefing books and index cards."

During the campaign, Palin says, she developed a distrust of "the left," which she says "came out attacking me." As Alaska governor, she had tried to project an image of bipartisanship, one that largely fell by the wayside after she became John McCain's running mate and offered harshly critical comments about Mr. Obama and Democrats.

"They showed me their hypocrisy; they showed me they weren't willing to work in a bipartisan way," she says. "I learned my lesson. Once bitten, twice shy. I will never trust that they are not hypocrites until they show me they're sincere."

According to a new Gallup poll, there is no clear frontrunner for the Republican nomination. The survey found that 19 percent of Republicans and Republican-leaners favor Mitt Romney, while 16 percent favor both Palin and Mike Huckabee. Another 13 percent say they support Newt Gingrich.