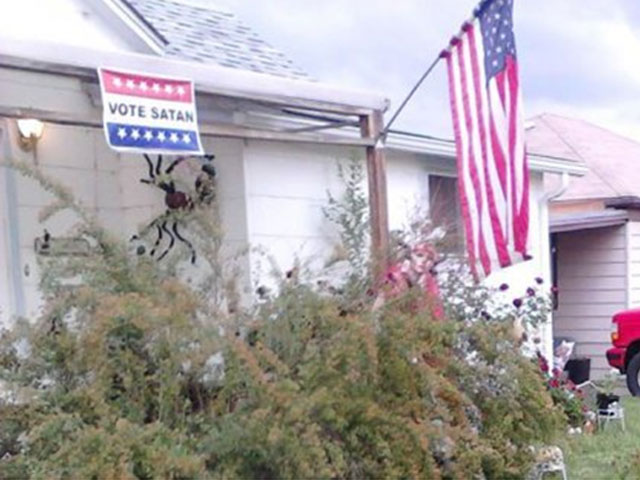 A Colorado couple who claim to be Satanists say they were targets of a hate crime when someone cut down a political poster from their front porch that said, "VOTE SATAN."

CBS Denver reports that Luigi and Angie Bellaviste of Mountain View, Colo., a Denver suburb, say they belong to the Church of Satan. They have a Satanic Bible in their home.

The couple wants the police to consider the incident a hate crime because their religion is protected by the U.S. Constitution.

"I feel like we're being treated unfairly because it's not a so-called mainstream religion," said Luigi.

"Had that been the Star of David or a verse from the Koran, or something like that got damaged by somebody against those beliefs that would certainly be considered a hate crime," Luigi said, according to CBS Denver.

"I know of many people who have the Virgin Mary and tons of Jesus memorabilia 'I Love Jesus' and what is the difference?," said Angie.

The couple's home and yard are decorated with items such as a Christmas tree that has been painted black, skulls and the number 666.

The poster that got taken down wasn't very popular with some neighbors.

"Everybody that sees that sign says, 'What is going on with those people?,'" said neighbor Mary Morasco.

Still, most of the Bellaviste's neighbors are on their side.

"Everyone has their own religion... to each his own, I guess," said another neighbor.

An officer with the Mountain View Police Department said the report will likely be filed as theft, not a hate crime, because there was no obvious attack on the couple's church or religious beliefs.