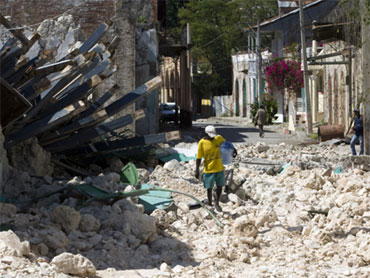 Saudi Arabia has donated $50 million in relief to Haiti to cope with the devastating earthquake that hit the country nearly two weeks ago, making it the largest donation from the Middle East to date, a Saudi foreign ministry spokesman said Monday.

since the Jan. 12 quake struck, but that doesn't count the bodies still in wrecked buildings, buried or burned by relatives or dead in outlying quake areas, according to government officials. The quake left some 700,000 people homeless in Port-au-Prince, mostly huddled under sheets, boards and plastic in open areas.

Israel sent a medical and rescue team in Haiti which the army said will finish its operations in the next few days and return to Israel by Thursday.

The official news agency of the United Arab Emirates, a Middle Eastern nation on the Persian Gulf, said a plane carrying 77 tons of basic relief supplies has been sent by the government to Haiti.

Complete Coverage: The Road to Recovery in Haiti
How to Help Victims

Dubai is one of seven sheikdoms making up the United Arab Emirates.

"Dubai may be far away, but we join in reaching out to Haitian families who have lost so much and are struggling just now to survive," the princess, a U.N. "Messenger of Peace," told the Emirates' news agency.

Jordan sent six tons of relief supplies to Haiti shortly after the quake hit. A field hospital was also dispatched there to help treat survivors, including members of Jordan's 700-strong, peacekeeping contingent in Haiti.

Three Jordanian peacekeepers were killed and 23 wounded in the quake.