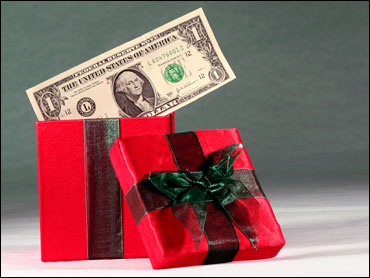 This story was written by CNET's Declan McCullagh.

Happy holidays. Now don't go out and buy some presents at the mall.

This is, of course, exactly the opposite of what Washington officialdom wants you to do. I don't know exactly how this line of spendthrift thinking started, but my hunch is that its recent antecedents came from President Bush's post-9/11 line that Americans should "take their kids on vacations" and "ought to go to ball games." Bush's more recent suggestion was "I encourage you all to go shopping more."

This is a bipartisan sentiment. Last month, House Speaker Nancy Pelosi sent out a press release lamenting the fact that consumer spending declined by a dramatic -- wait for it -- 1 percent.

The reality is that Americans have been on an unprecedented and unsustainable consumption binge for at least a decade. They paid bills with borrowed money. Savings was out, while leased BMWs, large-screen TVs charged to credit cards, and zero-down option ARMs were in.

Now, as the economy is trying to heal itself and return to normal, consumer spending has dropped off. This should be no surprise: When unemployment is rising, people save more because they're worried about losing their jobs. This is prudent and sensible; what's irresponsible is politicians urging visits to the mall when saving may be the wiser option.

A catalyst is that many consumers have pushed their credit cards to the limit and extracted as much as possible from their homes during the real estate bubble. Now that credit card issuers are becoming more restrictive, and the home equity loan spigot is being turned off, more debt is no longer as attractive (or as possible) an option.

Another reason that spending slackens is that some prices are falling. Why buy a house now when you might be able to save tens of thousands of dollars by waiting? Does anyone really think that, given the bad news for the auto industry including Toyota, car prices will be significantly more expensive in 2009?

A broader defense of savings is worth making, especially when thrift is forgotten. The late Henry Hazlitt, once an economics writer for the New York Times, said in 1946 that: "When money is invested (including by depositing it in a bank, which allows the bank to invest) it is used to buy or build capital goods -- houses or office buildings or ships or trucks or machines. Any one of these projects puts as much money into circulation and gives as much employment as the same amount of money spent directly on consumption. 'Saving,' in short, in the modern world, is only another form of spending."

Unfortunately, Washington has set an awful example. Politicians have borrowed over $1 trillion in the year ending in September, not counting the whopping costs of the Wall Street bailout. The Treasury's two largest creditors are China and Japan; our federal budget now depends on their continued generosity. (If our creditors demand more stringent terms in the future, watch out.)

But that's not all. What politicians have done, through years of government policies that enjoy bipartisan support, is to make it painful to save. When you save, you're first taxed on interest, capital gains or dividends, and a second time when you eventually pay sales tax on future purchases. Spending is taxed once.

Inflation tends to be another tax on savers, and an especially regressive one. One handy inflation calculator estimates that something that cost you $1 in 1928 would cost you $12.42 today. A 1932 newspaper archived by Google News shows that a pair of "smart" ladies' shoes was $1.95. Around the same time, 16 ounces of peanut butter was 21 cents, and bacon was 18 cents a pound.

The Federal Reserve's artificially low interest rates -- savings accounts are offering a mere 2 percent or so average return -- aren't helping. Not only does that mean an annual return of closer to 1 percent after federal and state income taxes, it's also hammered the U.S. dollar in the last few weeks, making imported goods more expensive.

Anyway, back to the holidays. If you have some last-minute holiday shopping planned, don't put it off any longer. Cancel it. Web sites like NoChristmasGiftsThisYear.com offer some useful no-spending-required ideas. Rather than spending money on loved ones, spend time with them instead.

Americans are planning to cut their Christmas spending by 50 percent this year, from $859 last year to $431 this year, according to American Research group, a market research firm. That indicates that, after many years of borrowing, people are starting to live within their means. It also shows they have more common sense than their elected representatives in Washington.

Note: Declan McCullagh will be on vacation the week of December 29th. This column will resume the week of January 5.