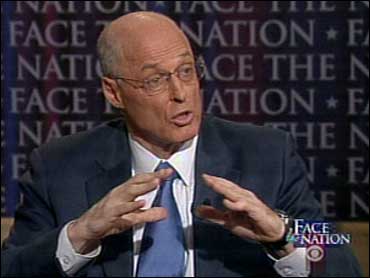 This column was written by Bernie Sanders.

For years, as a member of the House Banking Committee and now as a member of the Senate Budget Committee, I have heard the Bush administration tell us how "robust" our economy was and how strong the "fundamentals" were. That was until a few days ago. Now, we are being told that if Congress does not act immediately and approve the $700 billion Wall Street bailout proposal these "free marketers" have just written up, there will be an unprecedented economic meltdown in the United States and an unraveling of the global economy.

This proposal as presented is an unacceptable attempt to force middle-income families (and our children) to pick up the cost of fixing the horrendous economic mess that is the product of the Bush administration's deregulatory fever and Wall Street's insatiable greed. If the potential danger to our economy was not so dire, this blatant effort to essentially transfer $700 billion up the income ladder to those at the top would be laughable.

Let us be clear. If the economy is on the edge of collapse we need to act. But rescuing the economy does not mean we have to just give away $700 billion of taxpayer money to the banks. (In truth, it could be much more than $700 billion. The bill only says the government is limited to having $700 billion outstanding at any time. By selling the mortgage-backed assets it acquires--even at staggering losses--the government will be able to buy even more resulting is a virtually limitless financial exposure on the part of taxpayers.) Any proposal must protect middle income and working families from bearing the burden of this bailout.

I have proposed a four part plan to accomplish that goal which includes a five-year, 10 percent surtax on the income of individuals above $500,000 a year, and $1 million a year for couples; a requirement that the price the government pays for any mortgage assets are discounted appropriately so that government can recover the amount it paid for them; and, finally, the government should receive equity in the companies it bails out so that when the stock of these companies rises after the bailout, taxpayers also have the opportunity to share in the resulting windfall. Taken together, these measures would provide the best guarantee that at the end of five years, the government will have gotten back the money it put out.

Second, in addition to protecting the average American from being saddled with the cost, any serious proposal has to include reforms so that we end the type of behavior that led to this crisis in the first place. Much of this activity can be traced to specific legislation that broke down regulatory safety walls in the financial sector and allowed banks and others to engage in new types of risky transactions that are at the heart of this crisis. That deregulation needs to be repealed. Wall Street has shown it cannot be trusted to police itself. We need to reinstate a strong regulatory system that protects our economy.

Third, we need to address the needs of working families in this country who are today facing very difficult times. If we can bail out Wall Street, we need to respond with equal vigor to their plight. That means, for example, creating millions of jobs through major investments in rebuilding our crumbling infrastructure and creating a new renewable energy system. We must also make certain that the most vulnerable Americans don't freeze in the winter or die because they lack access to primary health care.

Finally, we need to protect ourselves from being at the mercy of giant companies that are "too big to fail," that is, companies who are so large that their failure would cause systemic harm to the economy. We need to assess which companies fall into this category and insist they are broken up. Otherwise, the American taxpayer will continue to be on the financial hook for the risky behavior, the mismanagement, and even the illegal conduct of these companies' executives.

These are the last days of the Bush administration, the most dishonest and incompetent in modern American history. It is imperative that, at this important moment, Congress stand up for the middle class and for fiscal integrity. The future of our country is at stake.
By Bernie Sanders
Reprinted with permission from The Nation