Kelly Cobiella is a CBS News correspondent based in Dallas. 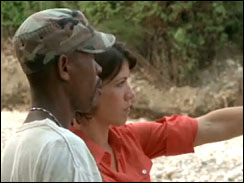 (CBS)
The Haitians have a saying, "beyond mountains there are mountains," meaning after each big obstacle stands another bigger obstacle.

I saw the saying come to life in the town of Cabaret. It was my first trip to Haiti, a ninety minute plane ride from Miami. So close, yet so foreign. There was no warning the night Hurricane Ike hit Cabaret and no evacuations. The town's two rivers swelled with such force the night Hurricane Ike hit, they swept dozens of people out to sea, and left a thick layer of mud in homes and on roads. At least 68 people were killed in flash floods in this farming town of 30,000 – 17 of them children.

When I arrived, the mud from the river was dry and a fortunate few managed to remove most of it from their homes. But there's no way to clean the bedding, the tables, the walls. Banana farmer Jean Renaud Romelus told me he hasn't even gotten that far yet. His home is filled with mud, his truck buried in mud, his crop flattened by mud. He has no food to sell; no food to eat.

Because Haiti's third-largest city is still flooded, and some 250,000 people are stranded without food or water, smaller towns such as Cabaret fall much lower on the priority list. In many of these towns, non-governmental aid groups have come to the rescue. An American relief organization called Mission of Hope Haiti has been handing out food in Cabaret. But even they admit they have a hard time keeping up with demand. I spent much of my time with workers from World Vision. They've been trying to reach the small salt-producing town of Grande Saline for days with no luck. No one knows how many people there died, or how many are waiting for food and water.

It's not all doom and gloom. Just off the coast of Haiti is an island called La Gonave. It's the one place normally guaranteed to flood. But this time, it didn't.

World Vision has built schools, markets, homes, and now floodwalls. A Haitian agriculture expert came up with the idea last spring. The walls, placed parallel down the mountainside, are made of nothing more than volcanic rock native to the island. The idea is to slow the floodwaters coming from the top of the mountain. Sure enough, not a single crop washed away, and river that normally floods the town below was still passable by foot. What's more, locals built the entire project by hand, trading labor for food. Total cost: $1.7 million in meals, for seven months. Haiti's Minister of Agriculture told me he wants to use the same model on the mainland. Instead of simply handing out meals, the government wants to put people to work and pay them in food. It's an ambitious plan, but what better way to spend the $10 million in pledged U.S. aid than to help Haitians protect their crops and make the mountains a little easier to climb.