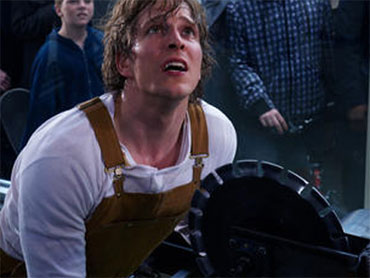 Psychokiller Jigsaw has come back to life at the box office.

Lionsgate's "Saw 3D," billed as the final installment in the series about Jigsaw's legacy of bloody terror, debuted as the Halloween weekend's No. 1 movie with $24.2 million, according to studio estimates Sunday.

That was $10 million more than the debut of last year's "Saw VI," the first dud in the annual horror franchise.

"Last year, a lot of people said, 'OK, that's it. Put a fork in it, it's done,'" said David Spitz, head of distribution for Lionsgate. "The following week, we were all disappointed and thought, what can we do to reinvigorate the franchise? So we shot the movie in 3-D and said this is the final chapter."

It paid off, though "Saw 3D" still brought a modest return compared to earlier chapters in the "Saw" series, whose second, third, fourth and fifth movies all topped $30 million over opening weekend.

"Seven years into it, obviously, that's a long time for one franchise to hold up year after year," said Paul Dergarabedian, box-office analyst for Hollywood.com. "Other types of horror movies have come into vogue. 'Saw' is part of that whole torture-porn genre, which has gone from great success to lesser success. But they've had a good run. There's nothing to complain about here."

"Saw 3D" also had the benefit of premium prices for 3-D screenings, which cost a few dollars more than tickets for 2-D movies. According to Lionsgate, 3-D projection accounted for roughly 77 percent of "Saw 3D" screenings but 92 percent of the movie's revenues.

Summit Entertainment's action comedy "Red" continued to hold up well, finishing at No. 3 with $10.8 million and lifting its total to $58.9 million.

Another franchise playing in 3-D for the first time, Paramount's "Jackass 3D," crossed the $100 million mark, coming in at No. 4 with $8.4 million. The stunt and prank comedy raised its haul to $101.6 million.

In narrower release, Fox Searchlight's legal drama "Conviction" broke into the top-10 after two weeks in a handful of theaters. Starring Hilary Swank in the real-life story of a woman who put herself through law school to free her brother on a murder rap, "Conviction" was No. 10 with $1.8 million, playing in 565 theaters and averaging a modest $3,230 a cinema.

Also in narrower release, Music Box Films had solid results for "The Girl Who Kicked the Hornet's Nest," which follows "The Girl With the Dragon Tattoo" and "The Girl Who Played With Fire" to finish the trilogy based on late author Stieg Larsson's best-selling thrillers.

Director David Fincher is shooting Sony Pictures' English-language remake of "The Girl With the Dragon Tattoo," starring Rooney Mara and Daniel Craig. The movie is due in theaters in December 2011.