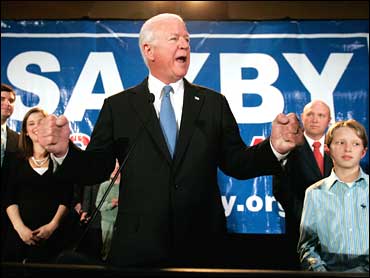 Chambliss' victory thwarted Democrats' hopes of winning a 60-seat filibuster-proof majority in the Senate. It came after a bitter monthlong runoff against Democrat Jim Martin that drew political luminaries from both parties to the state and flooded the airwaves with fresh attack ads weeks after campaigns elsewhere had ended.

Minnesota - where a recount is under way - now remains the only unresolved Senate contest in the country. But the stakes there are significantly lower now that Georgia has put a supermajority out of reach of Democrats.

With 96 percent of the precincts reporting, Chambliss captured 57 percent to Martin's 43 percent. Chambliss' win is a rare bright spot for Republicans in a year where they lost the White House as well as seats in the House and the Senate.

"This is a rare tidbit of good news for a Republican Party reeling from November's losses," said CBSNews.com senior political editor Vaughn Ververs. "While it may seem to have stopped the bleeding, the party remains in the kind of minority status it has not seen since the early 1990s. A runoff victory in a strong Southern state is thin thread upon which to build a political comeback. At the same time, the result is a caution signal to President-elect Obama that his election mandate has its limits."

Martin called Chambliss to concede before 10 p.m., then emerged to tell supporters as his voice cracked: "For me and my family and campaign team and all of you this is a sad moment."

Chambliss declared victory before about 500 cheering Republicans in Cobb County saying he'd hoped to win the race outright on Nov. 4. During the general election, it was a three-way race for the seat and neither Martin nor Chambliss was able to secure the necessary 50 percent to avoid the runoff.

"But you know, God works in strange ways," Chambliss said. "What we have seen over the last four weeks has truly been remarkable."

Chambliss' mantra on the campaign trail was simple: His re-election was critical to prevent Democrats in Washington from having a blank check. Chambliss, 65, had angered some conservatives with his vote for the $700 billion bailout of the financial services industry and his early support in 2007 for the guest worker provision in President George W. Bush's immigration bill. But fearful of unchecked Democratic dominance, some came back into the GOP fold Tuesday.

Martin made the economy the centerpiece of his bid, casting himself as a champion for the neglected middle class. He also linked himself at every opportunity to Barack Obama and his message of change. The Democratic president-elect was a no show on the campaign trail in Georgia but did record a radio ad and automated phone calls for Martin.

In the end, Martin, a 63-year-old former state lawmaker from Atlanta, wasn't able to get Obama voters back to the polls in large enough numbers to overcome the Republican advantage in Georgia, which has become an increasingly a reliable red state since 2002.

With most precincts reporting, turnout stood at about 35 percent. That's higher than the 20 percent predicted by a spokesman for Secretary of State Karen Handel but far less than the 65 percent who voted in last month's general election.

The runoff between the former University of Georgia fraternity brothers was necessary after a three-way general election prevented any of the candidates from getting the necessary 50 percent.

Chambliss came to the Senate in 2002 after defeating Democratic Sen. Max Cleland in a campaign that infuriated Democrats. Chambliss ran a TV ad that questioned Cleland's commitment to national security and flashed a photo of Osama bin Laden. Cleland is a triple amputee wounded in the Vietnam War.

He was a loyal Bush supporter and, as a freshman, rose to become chairman of the Senate Agriculture Committee. the former agriculture lawyer from Moultrie has been the ranking Republican on the panel since Democrats won control of the Senate.

Some 3.7 million people cast ballots in this year's general election, and both sides have since tried to keep voters' attention with a barrage of ads and visits by political heavy-hitters.

Chambliss brought in Alaska Gov. Sarah Palin, McCain's vice presidential pick, as his closer. She headlined four rallies for Chambliss across the state Monday that drew thousands of party faithful.