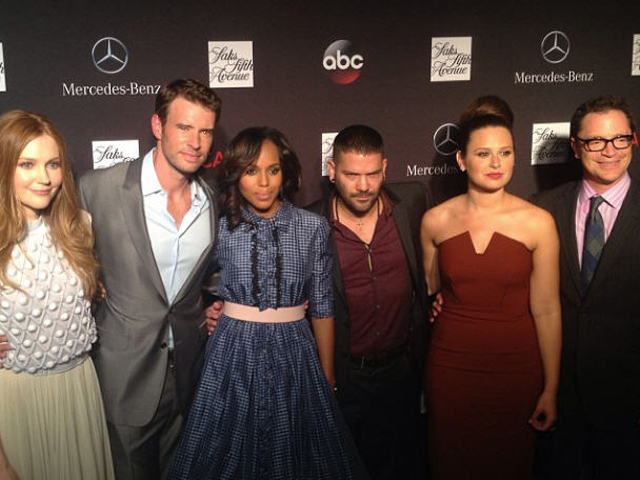 New York City got a bit more "Scandal"-ous on Wednesday night, when the cast of the ABC drama gathered for the unveiling of mannequins inspired by their characters in the windows of Saks Fifth Avenue.

"It's thrilling," said Kerry Washington, who plays Olivia Pope and curated the installation with the television show's costume designer, Lyn Paolo. "When I landed at one in the morning I came straight here from the airport because I was dying to see the final product from all these phone calls and brainstorming sessions, and it's really thrilling."

Co-star Darby Stanchfield shared a funny story about how she found out about the promotion: "My hair stylist on the show said, 'Um, babe, we need to cut an inch off your hair because they're going to match a wig. I was like, `What's this for? Who's making a wig of my hair?'"

Saks shared some snapshots from the event on its Instagram page:

"Scandal" centers on Pope, a crisis management expert in Washington, D.C. She also happens to be having an affair with the president of the United States, played by Tony Goldwyn.

"It's a D.C. show and it's a D.C. world and yet it is making fashion statements," said actress Katie Lowes. "I think that's rare and I think obviously it's being celebrated and I'm just honored to be a small part of it."

Washington and actor Scott Foley even stepped inside the window displays to check out their mannequins, much to the delight of those passing by who quickly started snapping photos.

The mannequins are wearing clothing by designers the show has used like Giorgio Armani, Donna Karan, Calvin Klein, Michael Kors and Carolina Herrera.

"Scandal" premieres Thursday at 10 p.m. ET. The stars couldn't give away spoilers but did say to expect the unexpected.

"These writers are not backing down at all," Washington said with a laugh.

"There are so many great moments so far... moments where at the (script reading) I couldn't pick my jaw up off the floor," added Foley.