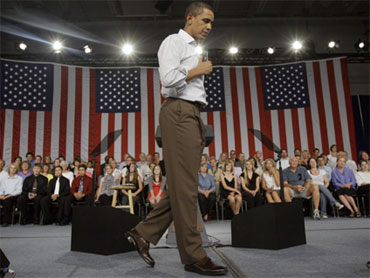 (AP Photo/Alex Brandon)
The coming week may represent a tipping point for the Obama administration's moving forward its health care agenda on its own terms.

As the president prepares for a major address to Congress Wednesday in support of his reform plans, President Obama has faced stiff challenges, from the raucous public debates at town hall meetings to Republican (and some Democratic) legislators critical of government control over health care coverage.

When asked on CBS' "The Early Show" about the president's prospects, CBS News Chief Washington correspondent Bob Schieffer said that the administration has to reclaim the issue of health care from its opponents.

"This has been some summer for this president: His polls are down, unemployment is up," Schieffer told "Early Show" anchor Harry Smith. "He really has got to get everybody together and regroup. And I think the way he has to do that, the way at least he has to start it, is to make a speech to the Congress that gets this whole debate on health care off the dime.

"I think you'll see him give more specifics on exactly what he wants in this plan, but he's also on a real high wire here. . . . Polls show that most Americans still don't know what is in the plan that Congress is working on.

"If he makes a speech and a couple days down the line they run another poll and they still don't know, it's going to show there's real problems with the substance of the plan itself and not with the presentation and the arguments being made. He's got it all on the line here and he really has to get something going."

"Did he make a mistake in the first place by giving this issue to Congress saying, 'You guys come up with a plan and then we'll work it all out and you can negotiate it all out?'" asked Smith. "I'm not sure too many people in the country actually understand what the president wants to get out of health care."

"I think you're exactly right on that," Schieffer said. "What the president did not want to do is what happened to the Clinton administration. When Hillary Clinton designed a health care package, they did it in secret, then sent it up to the Congress, and it just fell like a stone — it was dead on arrival. He wanted to avoid that. But he may have learned this lesson too well.

"It's very difficult to get 535 people to come to some consensus on details of something as complicated as health care. They need to know what it is the president will be for at the end of the day because these are very tough votes for them to make. These are survival votes for many of the people in Congress. They've got to know if the president will be with them when they vote for things like raising taxes. The hope of the White House is that he can give more details and sort of lay out that and sort of reassure the Congress this time, and also build some public pressure on them by making this speech. But if he doesn't do that, he's going to have a hard time.

"I think, Harry, this may well be the biggest week of the Obama administration so far. If he doesn't get this going, if he suffers defeat here, he'll be in trouble from here on."