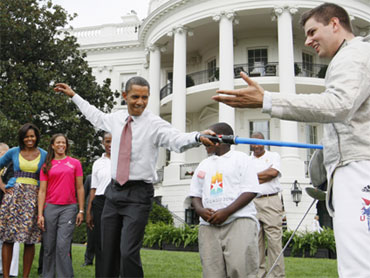 (AP Photo/Charles Dharapak)
The tactic worked for Tony Blair and Vladimir Putin: a leader making a high-profile bid to host an Olympic Games. Now President Barack Obama is throwing his weight towards Chicago's bid to host the 2016 Summer Games.

But given all that is on the president's plate — health care reform, Iran's nuclear program, the Afghan battle front, climate change legislation, and a struggling economy — is Mr. Obama in danger of spreading himself too thin by spending time on wooing the Olympiad to the shores of Lake Michigan?

"Think of Ronald Reagan: He tied his whole re-election campaign, 'Morning in America,' to the Olympics that summer in Los Angeles," Scheiffer told CBS "Early Show" anchor Harry Smith. "I think in the end you and I will talk about this, a lot of the chattering class will debate it back and forth, but in the end, I don't think it's going to make any difference to the success or failure of the Obama presidency.

"If the Obama presidency goes down because Barack Obama went to Copenhagen [to lobby the International Olympic Committee], it wasn't much of a presidency to start with. I think this president's success will be judged by how other things come out, not the least of which is Afghanistan, Iran and health care."

"Fourteen hours on airplane will not make or break his presidency," agreed Smith. "But at the same time, we've got Iran coming to a boiling point, Afghanistan waiting for a decision on how many troops should or should not be sent there, health care on the back burner — does he have time to do this?"

"Oh, I think the White House would argue that he does," Schieffer said. "Could you make the case that he doesn't? But again, he's not going to decide what to do about Afghanistan over the next 24 hours. Those are the questions, though, that really do count."

On that point, Schieffer said that Mr. Obama is busy engaged in a wholesale reassessment of American strategy in Afghanistan: "Remember in March the president told us that he had a new strategy; he sent a new general over there to carry out that strategy. Now here we are going over that total strategy once again. How many troops will he send, or is he going to send no troops? The answer is he simply hasn't decided yet."