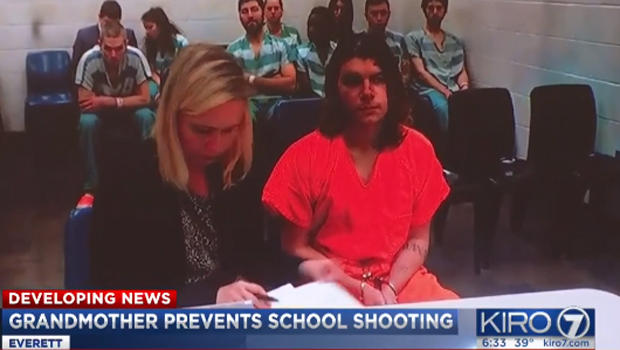 EVERETT, Wash. -- Authorities arrested a Washington state student suspected in a school shooting plot after his grandmother showed officers plans for an attack.

Police in Everett, which is about 30 miles north of Seattle, arrested 18-year-old Joshua Alexander O'Connor on attempted murder and other charges at ACES High School on Tuesday, The Daily Herald reported.

Earlier, O'Connor's grandmother called 911 and showed responding officers a journal where he allegedly drew up plans to shoot students and use homemade explosives at the school, police said.

"I need to make this count," O'Connor reportedly wrote. "I've been reviewing many mass shootings/bombings (and attempted bombings) I'm learning from past shooters/bombers mistakes."

The journal entries, obtained by CBS affiliate KIRO, continued: "I'm preparing myself for the school shooting. I can't wait. My aim has gotten much more accurate. … I can't wait to walk into that class and blow all those [expletive]s away."

O'Connor also allegedly wrote of making the attack "infamous" and talked of getting "the biggest fatality number I possibly can," KIRO reported.

Detectives serving a search warrant at the grandmother's house seized the student's journal, a rifle found inside a guitar case and inert grenades.

Public defender Rachel Forde noted the gun and the grenade shells were legal to possess. She said the "musings and ventings" in O'Connor's journal weren't enough evidence to support a charge of attempted murder.

Another entry allegedly described an armed robbery of a convenience store that police believe O'Connor participated in Monday night.

Cash from the robbery was supposed to help fund the school shooting, said deputy prosecutor Andrew Alsdorf in court.

O'Connor's bail was set at $5 million.

His arrest came a day before Wednesday's deadly school shooting in Florida, where police say a teen opened fire on his former high school, killing 17 and wounding 15 others.