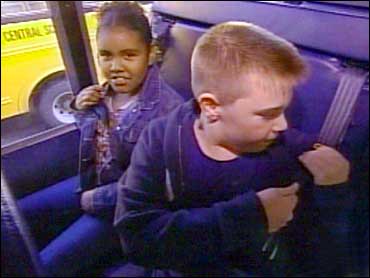 Riding that yellow bus is the safest way to get to school.

Far more kids are injured walking or riding in a car to school than they are taking the bus. But the question is: Would they be even safer if they buckled up?

Nicholas Torrisi ends every school day the way he begins it: buckled in.

He says, "First thing I do, I come on the bus, I take my backpack off, and then I strap on my seatbelt."

Nick is one of a handful of students in the Monroe-Woodbury school district in New York state testing out a new lap-shoulder seatbelt system.

He says, "I feel pretty safe with them because you can't move around that much."

Fran Subach drives the bus, just as she's been doing for 18 years. And she loves the new belts. She says it makes her feel safer. "I think it does because I know the children are in their seats," she notes.

The National Transportation Highway Safety Administration did a series of crash tests last October to see how they could make school buses safer than they are now. At the lab, they're testing belts that only go across kids' laps. In a crash, their heads still smack the seat in front of them. But when they use lap-shoulder belts, like the one Nicholas Torrisi uses, the kids basically stay in place.

The study found belts would make a small difference, reducing the number of kids killed each year in school bus crashes from eight to seven. Still Cliff Berchtold, director of transportation for the Monroe-Woodbury school district, thinks saving even one life makes them worth it.

Berchtold says, "This makes them safer, and I think it does, then that's what I think we should be doing."

There are only about eight school bus deaths a year, and putting lap shoulder-belts in can cost up to $7,000 a bus. Plus, belts reduce the number of kids who can fit on a seat, shrinking capacity.

Charlie Gauthier heads an association that studies school transportation. He says that could leave some kids off the bus.

He says, "It is the cost not just of installing and maintaining lap shoulder belts, it would be the additional cost of getting the additional buses to transport the same number of kids. Anything you do that takes kids off of buses and puts them in other, less safe modes of transportation is not a good idea."

And then, there's the frightening rollover school bus crash last month in Circleville, Ohio. Gauthier says that if lap-shoulder belts had been installed, they might have hurt more than helped.

Gauthier says, "No kids were injured - couple of bruises, couple of bumps. If you had lap shoulder belts in that bus, in that crash, the kids that were thrown to one side to the other would be dangling six feet in the air because a bus is eight foot wide."

Monroe-Woodbury has a year to decide if they want to pay to keep the belts. Nick Torrisi's mom's already made up her mind.

Catherine Torrisi says, "I think it's worth the expense. These are children's lives - absolutely."