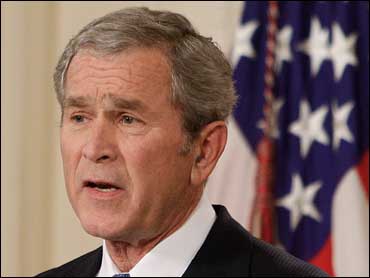 (AP Photo/Manuel Balce Ceneta)
Schools in Arlington, Texas, have cancelled plans to send students to an event involving President George W. Bush. The decision comes after the district attracted criticism for scheduling the Bush event despite opting not to show President Obama's recent speech to students.

The Dallas Morning News reports that the school had been planning to send about 600 fifth graders to the event involving Mr. Bush, which is taking place next Monday at Cowboys Stadium. At the event, the newspaper reports, "The Super Bowl XLV Host Committee plans to announce details of a community service and education program that they believe is one of the largest of its kind in the nation."

Super Bowl XLV will be held at the Dallas Cowboys' stadium in February 2011, at the end of next year's NFL season.

The school received an onslaught of negative attention for planning the trip to the Bush event in the wake of its decision not to show the Obama speech, which centered on the importance of working hard and staying in school.

Students in the district, it should be noted, were given the option of taking a half day to watch the speech off-campus if they wanted to do so. The speech was also recorded so that teachers had the option of showing it at some point.

Superintendent Jerry McCullough said in a letter this morning that the decision to cancel the Bush trip had been made "in order to maintain our focus on instruction," the Morning News reports.

"In retrospect, I can see how the district's decisions concerning these two events could be seen as favoring one event over another," he said.