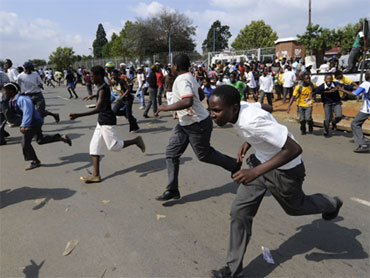 Authorities say the children were run down by a Mini Cooper but it is unknown who was driving the vehicle at the time. Two children remain in critical condition.

Both defendants tested positive for cocaine and morphine after the March 8 race, authorities said.

The Times of Johannesburg reports that during his hearing yesterday, Maarohanye accused the media of trying to "crucify" him, and denied that he had taken alcohol or drugs before the incident. He pleaded with the judge to release him on bail so he could be with his "family and unborn child."

The case has prompted an outcry in South Africa, and some 2,000 rioting youths and children, many in school uniform, gathered outside the courthouse Wednesday. Some threatened to use mob justice and kill the hip-hop artist and burn down his home if he were granted bail.

One student on his way to the protest today was run over by a truck and killed.

The BBC reports that judge Andre Auret was aware that the safety of the accused was in jeopardy, but said, "I am convinced they have means to protect themselves in various ways."

The Times reports that students said they would not return to classes until Maarohanye is behind bars.

According to the paper, one group from Mapetla High School threatened to "burn down [Maarohanye's] house and the courthouse and kill his lawyer" if bail were granted.

The trial has been set for April 7.

The defendants were ushered out of court via a secret passageway under heavy guard. 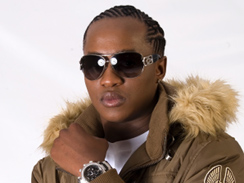 His mother, Jackie Maarohanye, ran the Ithuteng Trust School in Soweto, aimed as helping children who were juvenile offenders, rape or abuse victims, or addicts. It was lauded in an HBO documentary, and was the recipient of charity from Oprah Winfrey and others.

Four years ago, accusations arose that "Mama Jackie" had coached children to make up stories of abuse in order to attract funding, eventually leading to the school's closure.

She and two accomplices were later convicted of kidnapping and assault for holding hostage a former student investigating allegations against the school.