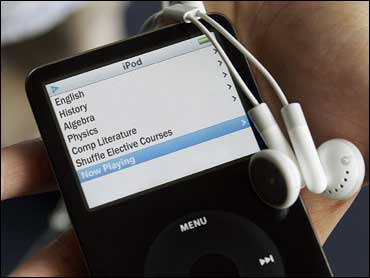 Banning baseball caps during tests was obvious — students were writing the answers under the brim. Then, schools started banning cell phones, realizing students could text-message the answers to each other.

Now, schools across the country are targeting digital media players as a potential cheating device. Devices including iPods and Zunes can be hidden under clothing, with just an earbud and a wire snaking behind an ear and into a shirt collar to give them away, school officials say.

"It doesn't take long to get out of the loop with teenagers," said Mountain View High School Principal Aaron Maybon. "They come up with new and creative ways to cheat pretty fast."

Mountain View recently enacted a ban on digital media players after school officials realized some students were downloading formulas and other material onto the players.

"A teacher overheard a couple of kids talking about it," said Maybon.

Shana Kemp, spokeswoman for the National Association of Secondary School Principals, said she does not have hard statistics on the phenomenon but said it is not unusual for schools to ban digital media players.

"I think it is becoming a national trend," she said. "We hope that each district will have a policy in place for technology — it keeps a lot of the problems down."

Using the devices to cheat is hardly a new phenomenon, Kemp said. However, sometimes it takes a while for teachers and administrators, who come from an older generation, to catch on to the various ways the technology can be used.

Some students use iPod-compatible voice recorders to record test answers in advance and them play them back, said 16-year-old Mountain View junior Damir Bazdar.

Others download crib notes onto the music players and hide them in the "lyrics" text files. Even an audio clip of the old "Schoolhouse Rock" take on how a bill makes it through Congress can come in handy during some American government exams.

Kelsey Nelson, a 17-year-old senior at the school, said she used to listen to music after completing her tests — something she can no longer do since the ban. Still, she said, the ban has not stopped some students from using the devices.

"You can just thread the earbud up your sleeve and then hold it to your ear like you're resting your head on your hand," Nelson said. "I think you should still be able to use iPods. People who are going to cheat are still going to cheat, with or without them."

Still, schools around the world are hoping bans will at least stave off some cheaters.

A teacher at San Gabriel High School in West Covina, Calif., confiscated a student's iPod during a class and found the answers to a test, crib notes and a definition list hidden among the teen's music selections. Schools in Seattle have also banned the devices.

The practice is not limited to the United States: St. Mary's College, a high school in Sault Ste. Marie, Ontario, Canada, banned cell phones and digital medial players this year, while the University of Tasmania in Australia prohibits iPods, electronic dictionaries, CD players and spell-checking devices.

Conversely, Duke University in North Carolina began providing iPods to its students three years ago as part of an experiment to see how the devices could be used to enhance learning.

The music players proved to be invaluable for some courses, including music, engineering and sociology classes, said Tim Dodd, executive director of The Center for Academic Integrity at Duke. At Duke, incidents of cheating have declined over the past 10 years, largely because the community expects its students to have academic integrity, he said.

"Trying to fight the technology without a dialogue on values and expectations is a losing battle," Dodd said. "I think there's kind of a backdoor benefit here. As teachers are thinking about how technology has corrupted, they're also thinking about ways it can be used productively."