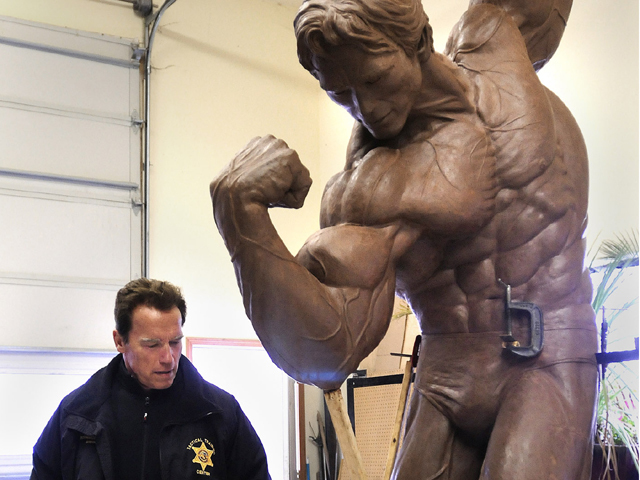 (CBS/AP) From the stage to the big screen and from behind the podium, Arnold Schwarzenegger has pumped us up both with his charm and strong, made-for-the-movies physique. He's now reliving his bodybuilding days as his image of his youth has been sculpted into a 9-foot-tall statue.

The statue, depicting Schwarzenegger at the height of his bodybuilding career, has received a final critique by the former Mr. Universe before being sent for bronzing.

The former California governor, who recently announced his return to acting, visited northern Idaho on Wednesday to suggest a few modifications to the clay sculpture. It's destined to stand in a rippling, full-flex pose outside his childhood home, which is now a museum in Thal, Austria.

Schwarzenegger first commissioned Lewiston artist Ralph Crawford in the 1970s to create a small bronze that became a trophy for a fitness event. Other commissions followed, including the most recent.

He noted Crawford's passion and his ability to sculpt accurate proportions when it comes to veins, muscle separation and head position. He also said he appreciates Crawford's method, taking months to create a sculpture.

"It was the bodybuilding that got me to America, that got me into movies, that got me the governorship," he said. "That's where I learned about reaching out and helping other people."

Schwarzenegger comes from a humble upbringing. He was born in 1947 in the village of Thal, just outside Graz, where he began his bodybuilding career. He emigrated to the United States in 1968 and became a naturalized U.S. citizen in 1984, but has retained his Austrian citizenship.

He said his childhood home where the statue will stand is a two-story building that has been restored to what it was like when he was a boy. That means it has no running water, electric wiring runs on the outside of walls, and an outhouse and primitive gym are outside.

Schwarzenegger said that when he lived there and his family bathed, his mother went first, then his father, then his older brother and then him. He said the water was black by the time it was his turn.

He said as a child he was frightened by paintings on the walls of the house that showed knights with swords and axes. His parents had them painted over.

"Maybe that's what gave me the idea of doing 'Conan the Barbarian,'" he said.

Crawford, 77, said he has already started work on a new sculpture of Schwarzenegger depicting him during his time as governor.