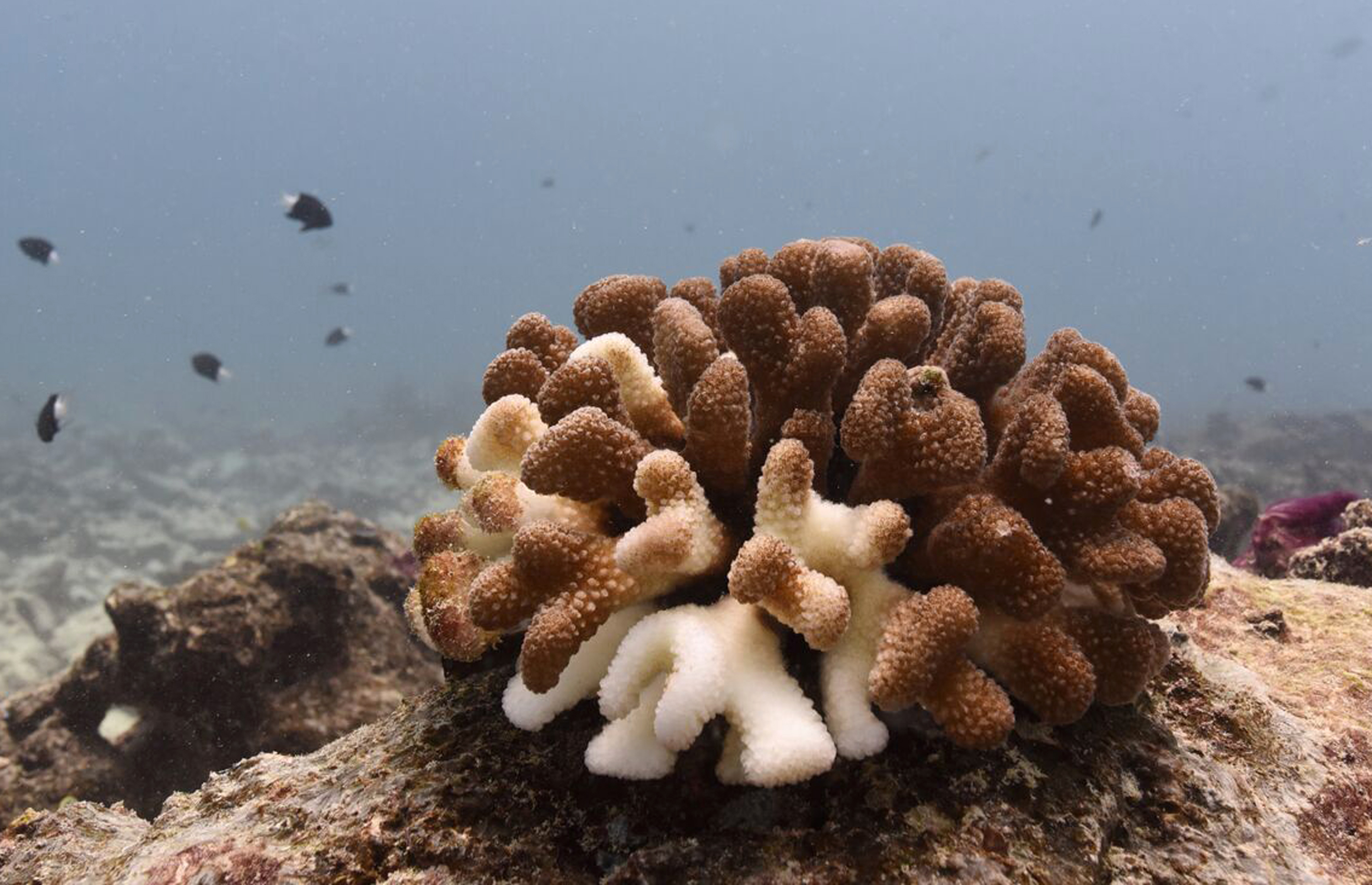 KIRITIMATI-- The coral on the sea floor around the Pacific island of Kiritimati looked like a boneyard in November -- stark, white and lifeless. But there was still some hope.

This month, color returned with fuzzy reds and browns, but that's not good news. Algae has overtaken the lifeless coral on what had been some of the most pristine coral reefs on the planet, said University of Victoria coral reef scientist Julia Baum after dozens of dives in the past week. Maybe 5 percent will survive, she estimated.

"What it really looks like is a ghost town," Baum said. "It's as if the buildings are standing but no one's home."

Kiritimati is where El Niño, along with global warming, has done the most damage to corals in the past two years, experts said. While dramatic images of unprecedented total bleaching on Australia's Great Barrier Reef are stunning the world, thousands of miles to the east conditions are somehow even worse.

"This El Niño has its most powerful grip right at this spot," said Georgia Tech climate scientist Kim Cobb in a telephone interview from the island 2,000 miles south of Hawaii.

"It is unprecedented," Baum said. "This is absolutely the most intense response, the most dramatic death of a coral reef from an El Niño event."

The island has been on the highest level of alert for coral stress since June 2015. NOAA's Eakin wasn't part of the Baum-Cobb team, but when he saw their photos, he emailed Baum: "I was simply aghast at the pictures. I expected the worst, but still wasn't prepared for those."

He called it "gruesome."

It's the heat that's killing the coral. In December, temperatures at Kiritimati peaked at 88.5 degrees and have been about 5 to 7 degrees warmer than normal. That's the kind of temperature spike that can be the difference between life and death for coral, Eakin said.

Water temperatures around the island are nearly a degree Fahrenheit warmer than the last big El Niño, in 1997-98, and the damage is far worse, likely an assist from man-made warming on top of the natural transitory warming from El Niño, Cobb said.

"Coral reefs cover only one-tenth of one percent of the sea floor but are home to 25 percent of all marine species," Eakin said in an interview.

Baum has hope that something can survive because of what she calls "little miracle corals," the small amount of one particular species that seems to be surviving so far. Perhaps over a couple decades it can repopulate this once bright reef, she said.

In Australia, where "100 percent of the corals are snow white on some reefs," it is hard to imagine that Kiritimati is worse, said Terry Hughes, an Australian professor who heads the country's National Coral Bleaching Task Force. One area to the north "is absolutely blitzed," he said.

In the past, El Niño warming of the Pacific didn't cause such mass bleaching events in Australia. But the effects of recent, major El Niños have coincided with water that's already warmer because of man-made climate change, Hughes said.

"The link between bleaching and global warming is incontrovertible," Hughes said.

Coral can survive mild or short-term bleaching and recover, but if it goes too long or is too severe, they die from bleaching or disease, Eakin said.

Climate scientist Cobb said 7,000 years of coral fossils in Kiritimati don't show such a big die-off. It moved Cobb to tears on one dive.

"They are older than me," 50 to 60 years old, Cobb said. "To see them succumb was really an emotional event."

"When you go in on a bleached reef all of a sudden those corals are bleached white, the sound is amazingly quiet. It's eerily quiet, the fish aren't behaving normally," Eakin explained to CBS News' Jeff Glor a few months ago.

In 2014, Glor spoke with world renowned oceanographer Sylvia Earle during a dive in the keys.

"When a coral reef dies you lose the creatures that only occur there, and no where else," she said then. "It's thought that we've already lost thousands of species that can never be recovered because they are gone."