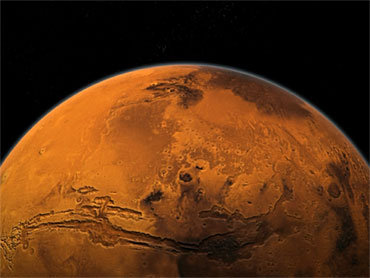 If NASA's exploration of Mars were summed up in a bumper sticker, it would read: "Follow the water."

Well, some water was found - ice was discovered by the Phoenix lander in 2008. Now what?

It's time to search again for signs of life, scientists say, something they haven't done since 1976. This time, they want to bring Martian rock and soil samples back to Earth. Here, they could be analyzed for fossilized traces of alien bacteria, or chemical or biological clues that could only be explained by something that was alive.

Such a venture as now outlined would be a three-part act, cost as much as $10 billion and take several years to complete. NASA can't afford it on its own so it recently joined the European Space Agency to map out a shared project.

Space policy experts think the timing is right despite the risks and hefty price tag.

"We're about out of things to do on Mars other than a sample return," said George Washington University space scholar John Logsdon. "It is an extremely expensive undertaking, probably the most expensive robotic mission to Mars and clearly the most complex."

The idea of bringing Mars samples to Earth for study has been floated for the past 25 years without going anywhere due to cost and engineering concerns. Many believe it's still the best way to answer whether life ever arose on Mars.

At a town hall meeting near Los Angeles this spring, NASA told Mars researchers the next effort would be done in phases. It would be attempted before the mid-2030s, the timetable for astronauts to land on Mars as proposed by President Barack Obama.

As currently envisioned, a pair of rovers would launch in 2018 to a spot where water once flowed. One would drill below the surface; the other would collect rocks and dirt and seal them in containers. Several years later, some cosmic choreography would be used to get the bounty back to Earth. One spacecraft would touch down to collect the samples and launch them into orbit around Mars where a rendezvousing spacecraft would capture the bounty and return it to Earth.

Even if those challenging tag-team missions went as planned, the first Mars samples would not be returned until the 2020s. The concept has plenty of critics. Marine chemist Jeffrey Bada at Scripps Institution of Oceanography thinks it makes more sense for NASA to simply look for the molecular building blocks of life by running experiments on Mars before hauling soil back. Otherwise, it "will be a giant waste of money and likely delay a definitive answer to the life on Mars question for decades," he said.

Mars is cold, dusty and constantly bombarded by dangerous radiation. But billions of years ago, it was a warmer, wetter planet based on the elaborate mazes of gullies, canyons and other land forms thought to be shaped by flowing water.

People have wondered about the chance for life there since the 1900s when amateur astronomer Percival Lowell claimed to have spotted irrigation canals. He theorized they were built and used by Martians to channel water from the polar caps to the desert and other arid regions.

Later observations by several flybys of Mariner spacecraft in the 1960s and 70s revealed a cratered wasteland similar to our moon. Mars is dead, people thought.

Interest was renewed in 1971 when Mariner 9 spied massive extinct volcanoes, river beds, dry channels and a network of canyons.

By the time two Viking spacecraft landed in 1976, hopes were high for an answer to one of life's most fundamental questions: Are we alone in the universe?

Viking's experiments found no signs of life. That led many researchers to believe that the planet was hostile to life.

"Viking tried to find life on Mars by hitting a home run," said Scott Hubbard, a former NASA Mars czar who now teaches at Stanford University. "It was one mission betting on having just the right instruments and the right approach. They got a lot of data, but they did not see any of the signs of life that they thought they would."

No other Mars mission since has pursued the life question directly. Instead, spacecraft circling Mars or landing on it searched for proxies such as water, an essential ingredient for life, and environments that might be suitable for life.

Even the budget-busting $2.3 billion Mars Science Laboratory, scheduled to launch next year after much delay, is not equipped to look for life. Instead, it will study the planet's habitability.

Despite the success of the past decade - ice and evidence of ancient water - there's still no answer as to whether life existed on Mars. Life as we know it needs more than just water. It also needs nutrients and energy.

Lately, "there's confidence that, 'Hey, maybe we can do this.

Maybe it's not all science fiction,"' he said.

Tests of Martian rocks and soil on Earth would be much more useful than the limited ones done by tiny robotic instrument packages on Mars.

A slam dunk would be finding fossilized remains. But scientists would mainly look for complex organics such as carbon compounds that make up the building blocks of life on Earth and other chemical clues potentially left by microbial life.

Planetary scientist David Paige of the University of California, Los Angeles said the gamble is worth it.

"It's been so long since Viking. Each generation wants to take up the quest," Paige said. "You can't blame people for being interested in this."