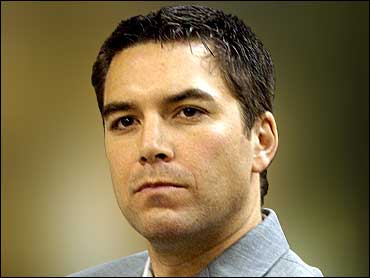 (CBS/AP) SAN FRANCISCO - Convicted murderer Scott Peterson filed an automatic appeal to the California Supreme Court on Thursday, eight years after he was sentenced to death for the murders of his wife and unborn son.

In the appeal, his lawyer argued that the overwhelming publicity the trial received, incorrect evidentiary rulings, juror misconduct and other errors deprived Peterson of a fair trial.

A San Mateo County jury found the former fertilizer salesman guilty of suffocating Laci Peterson and dumping her in the San Francisco Bay on Christmas Eve 2002.

Peterson was convicted in 2004, although he maintained his innocence throughout the trial. He claimed that Laci was killed sometime in the morning of Dec. 24, 2002 after he left their Modesto home to go fishing in the San Francisco Bay. Death penalty lawyer Cliff Gardner noted that Peterson was convicted and sentenced to death even though investigators never directly proving "how, where or when" the murder occurred, The Associated Press reported.

Prosecutors told the jury that Laci was killed sometime between the night of Dec. 23, 2002 and the morning of Dec. 24, 2002. They believed Laci was suffocated in her home, but Gardner argued that there was little direct evidence collected at the house to support that theory.

"Before hearing even a single witness, nearly half of all prospective jurors admitted they had already decided Mr. Peterson was guilty of capital murder," Gardner claimed.

Although the trial was moved once from Stanislaus County to San Mateo County, Gardner argued the trial should have been moved again because of the crush of publicity in San Mateo County. Right outside the courthouse during initial jury selection, a radio station posted a large billboard which had a telephone number for people to call in and vote" whether Peterson was a "man or monster," according to the AP. Peterson was pictured in an orange jailhouse jumpsuit.

"The publicity continued throughout trial," Gardner argued. "A mob estimated at more than 1,000 people gathered at the courthouse to await the guilt phase verdict. After the guilty verdict was announced, the 12 jurors departing to await the beginning of the penalty phase - and decide whether Mr. Peterson would live or die - were met with wild applause and cheering."

Gardner also argued that the judge made several erroneous evidentiary decisions that led to Peterson receiving an unfair trial. Gardner claimed the judge automatically excluded prospective jurors who said they opposed the death penalty, while instead they should have been questioned more about whether they could still decide the case fairly.

Some of the prosecution's strongest evidence should never have been shown to the jury, Gardner also argued. For instance, Gardner alleged that the police dog who picked up Laci's scent at the Berkeley Marina "had a dismal record of being wrong a remarkable 66 percent of the time," according to the AP.

All death penalty cases are appealed to the California Supreme Court, which is struggling to keep up with the pace of cases, according to the AP. There are 725 inmates on death row and no prisoner has been executed in California since January 2006. Lawsuits in federal and state courts have temporarily halted executions.

The appeal is expected to take months, if not years, to be resolved.