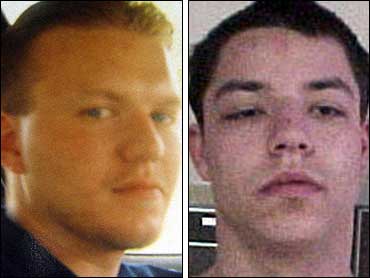 The silence is telling at the place Alice Donovan worked swing shifts.

Donovan, 44, worked as a quality control technician at Precision Southeast Inc. in Marion, not far from her home in Galivants Ferry or the Conway, S.C., Wal-Mart parking lot where police believe she was kidnapped by escaped prisoners who took her car.

"She's always at work," co-worker Heather Byrd said. "She's always on time." And that's what led workers to know something was wrong last Friday when she didn't show up for her 7 a.m. to 7:30 p.m. shift.

Her husband, Barry, is an engineer for the company. He wasn't there for work that morning either. A call to the Donovan's home brought the news that Alice hadn't returned for her shopping trip Thursday.

Now workers have watched the story unfold in the headlines about Branden Basham, 21, and Chadrick Fulks, 25, and how police have linked them to Donovan's disappearance. They've seen Basham and Fulks captured.

Fulks, who was captured Wednesday in Goshen, Ind., faces two counts of carjacking and a kidnapping charge filed in federal court in South Carolina. Basham was indicted on charges stemming from an alleged attempted carjacking and a shootout with a police officer in Ashland, Ky., prosecutor J. Stewart Schneider said.

But the co-workers, the FBI and people watching Donovan's story unfold still don't know when or where Donovan will be found. Police have found no trace of Donovan, except for her blue BMW.

The two men under arrest are also suspected of abducting a 42-year-old Kentucky man, James Hawkins, on Nov. 6 and leaving him tied to a tree in southern Indiana. Hawkins, tied with duct tape and electrical cord, freed himself after struggling for 14 hours.

Authorities are checking out the possibility that Donovan might also have been tied to a tree somewhere, and the search for her is concentrated on the area she was last seen, near Shallotte, N.C. Searchers used helicopters and foot teams Thursday to comb a wooded, swampy spot.

When film of Donovan's car appeared on news programs and Internet sites after police captured the suspected kidnappers, Donovan's co-workers gathered around a computer monitor and replayed the video images frame by frame, searching for a glimpse of their friend in her car.

Byrd and her co-workers remain optimistic.

"The word of choice is concern," she said. "We have to have hope. Without hope, we don't have anything. Everybody's kind of walking around in slow motion."

The company was a livelier place with Donovan there. "When she came in a room, everybody knew it. She was a people person. She knew how to befriend someone, how to get them to open up."

Barry and Alice Donovan moved to South Carolina about seven years ago because they came to love the South.

Donovan and her four sisters and a brother grew up in a two-story house on Main Street in Kingston, N.H., a small town of about 7,500 people southeast of Manchester near the Massachusetts' border.

Donovan and her siblings often played outside, riding bicycles and running around with the other children. They lived next door Kingston Police Chief Donald Briggs.

Judy Ezell, one of Donovan's sisters, describes Alice Donovan as the hub. "She got along well with her siblings in either direction. She was in the middle. She tried to be the peacemaker."

Donovan dropped out of Sanborn Regional High School in Kingston to marry a drummer. They had two daughters, but divorced. Her first husband died of a heart attack, Ezell said.

She met Barry Donovan while living in Barrington, N.H., and the couple moved to South Carolina about seven years ago, Ezell said. "They fell in love with the South," she said. "They enjoyed the climate, the customs, the food."

The Donovans spent two years building their home in rural northwest Horry County and moved into it in the spring, Byrd said.

"She would come into work with blisters on her hands from hammering," Byrd said.