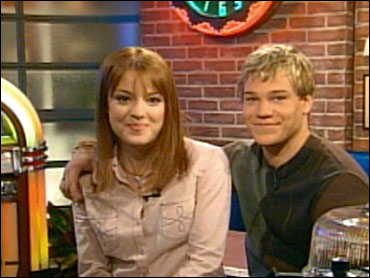 Tuesday, the live screen tests in search of tomorrow's next big soap stars continued with you, Early Show viewers, determining who the winners will be.

West and Dollar play young sweethearts: Shayne and Marina, on CBS daytime drama "Guiding Light" and for the Soap Star Screen Test they got to actively participate in the auditioning process.

He says students frequently asked him questions about what it is like to be in a soap opera and what the casting director is really looking for.

Dollar's advice to the aspiring actors? "Just have fun and be yourself. That's really the only thing you can do and just relax," she tells The Early Show co-anchor Hannah Storm.

New to the soap scene, Dollar says the most important thing she has learned thus far is: "How to get away of yourself. You're thrown deep end into the pool and go with it and trust yourself and you get over being nervous a little bit."

The piece of advice Vitalbo appreciated came from West who told her before her scene, "It's just me and you, so just look at me and it will be fine."
Once her scene was over, Vitalbo said, "It makes so much sense. Ignore the cameras and it helped a lot."

West said she just did great. Vitalbo said, "I was actually more nervous up to the point of doing this and when we did it live, I was really relaxed, thank you. You guys and everybody were so great and it was a relaxing situation."

Spearman, a dancer, was also relaxed, something he credited to the dancing moves he did offstage. "Trying to get the feeling of the stage," he said.

He also got great reviews for his performance. Whether he gets a spot on "Guiding Light" or not, he says, he will pursue an acting career and pound the pavement in New York City.

He said, "In the words of Gov. Arnold Schwarzenegger, 'I'll be back.'"

It is up to you, the viewer, to decide. You'll be able to vote for your favorite male and female performer after Friday's show. And on Monday, Nov. 17, we'll let you know who's won a role on the soap next summer.

The screen test continues Wednesday with the help of "Guiding Light" regulars David MacDonald and Laura Wright, who play Cassie and Edmund.