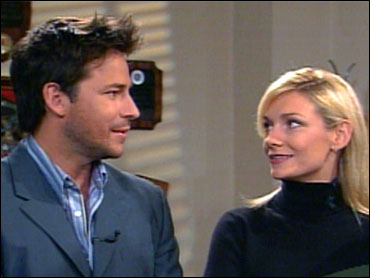 Stars from the show, Ricky Paull Goldin and Beth Ehlers, better known to fans as Gus and Harley, offered acting tips for the star hopefuls before their live screen tests.

Goldin, who is also a TV producer, says he looks for listening skills in talent. He explains, "It doesn't matter so much about the lines. Obviously, it does, it's your map, but you need to listen to each other."

Ehlers worked in casting for a while and added, "Like any conversation you would have with anyone, how they deliver the line and how their voice is going to respond. What are you seeing? What are you doing?"

She performed along side Timbrell, and said, "I thought he was pretty good. I told him every line has an intention. It's not accidental that it's written. You have to give it a purpose, put something behind it and build a relationship of who you and I are and build on it."

A trumpet player with no acting experience, Timbrell went to the on-campus auditions on a whim and said he was surprised to be picked among the finalists. He said, "It was a shock, basically. Maybe there is some natural talent there. I think performing on stage does it a little bit." And pointing at Ethers he added, "It was great working with her."

Goldin helped Warren get ready for her screen test by going over the lines. Warren says, "I was nervous. But he made me feel really comfortable. We went over it a bunch of times."

Goldin noted the script had some confusing lines, "We had to change one of the names. She got thrown some curve balls like we do, right before you go." To Warren he said, "I thought you handled it well. I thought she did a great job."

Well there you have it. You are now the casting director.

Vote for your two favorite performers starting Friday, Nov. 14, at 9:00 a.m. ET. If you need to review the auditions, just click on our interactive at right– it's all there: the poll, screen tests, bios, preliminary auditions, even the scripts. Votes will stop being counted Saturday, Nov. 15, at midnight ET.