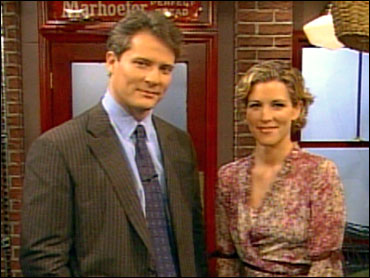 Farber and San Pedro are competing for a role on the CBS daytime drama this summer. And you, the viewer, are the judge.

Wright herself got her start in a very nontraditional way. She was working at her family's gas station and, from there, she ended up on national TV.

She says, "I auditioned on videotape with 20 other girls in Washington, D.C. and a week later, they called me for a screen test. Two days later, they said I had the job."

So it can happen just as easily. Macdonald says he usually tells those wanting to get into the business, "Please find something else to do! No, I say if you really love it, work hard, because there are many people out there working harder."

A stage actor, Macdonald says he loves working in soaps. "Soaps keep me in New York, and soaps are a wonderful, wonderful family. I thought I'd do a for a little bit and leave, but I've stayed."

Macdonald performed alongside Farber and said her performance was "fantastic. It's hard to assess in the middle of something. We had a lot of fun."

Feeling good about her work, Farber said, "I've been having a blast. This is an extra two minutes that I got to do my thing today! I ask for another two minutes, and I just loved it, and you [Macdonald] are amazing."

Wright had the same critique for San Pedro: "I think he's great." In their scene, he asked her for a date. Complimenting Wright on her looks, San Pedro said, "She was great to work with, and she is gorgeous, so it wasn't that hard…It is nerve wracking, but she told me to be calm and play with it and have a good time, so asking her on a date wasn't that hard."

Get to know the star hopefuls. Click on the interactive at right to check out their bios, preliminary auditions and live screen tests. You'll be able to vote for your favorite male and female performer after Friday's show.

On Monday, find out who won a role on "Guiding Light."