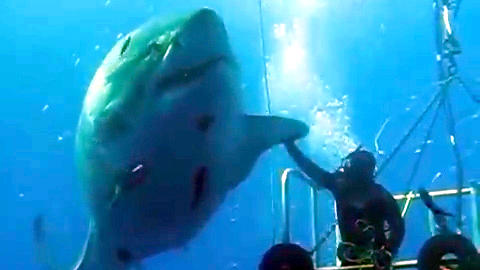 Some of the latest and greatest viral videos include a giant underwater predator named "Deep Blue" giving props to a diver, and a guy who does silly dances behind unsuspecting New Yorkers.

First up, ROFFS shared this video of scuba diver and researcher Mauricio Padilla exiting his underwater cage to touch an infamous great white shark named "Deep Blue." The massive predator is believed to be one of the largest ever recorded.

It's fun to be silly, especially in New York City where people are so wrapped up in their own little worlds, they tend not to notice things. Director and dancer Meir Kalmanson has a blast busting some moves behind unsuspecting Big Apple residents, in this video posted by AMK Productions.