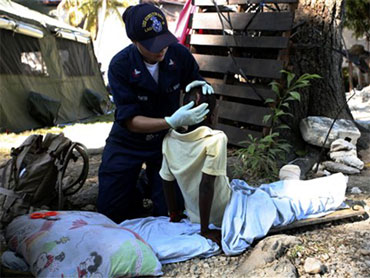 The United Nations says Haiti's government has declared the search and rescue phase for survivors of the earthquake over.

The Office for the Coordination of Humanitarian Affairs says 132 people were pulled from the rubble alive by international search and rescue teams.

Spokeswoman Elisabeth Byrs said Saturday that humanitarian relief efforts are still being scaled up in the capital Port-au-Prince, Jacmel, Leogane and other areas affected by the Jan. 12 quake.

Six U.S. search and rescue teams remain in the country, but they are conducting final sweeps through Port-au-Prince using search dogs and sonar equipment. Once operations have finished, the U.S. will leave behind its search-and-rescue equipment as a donation to Haiti's SAR teams, CBS News reports.

Within days, the government will move 400,000 people made homeless by Haiti's epic earthquake from their squalid improvised camps throughout the shattered capital to new resettlement areas on the outskirts, a top Haitian official said Thursday.

Authorities are worried about sanitation and disease outbreaks in makeshift settlements like the one on the city's central Champs de Mars plaza, said Fritz Longchamp, chief of staff to President Rene Preval.

"The Champ de Mars is no place for 1,000 or 10,000 people," Longchamp told The Associated Press. "They are going to be going to places where they will have at least some adequate facilities."

Meanwhile, the U.S. government is tackling repairs to Haiti's heavily damaged main port. There's still no way of telling how long before ships can dock there and unload supplies in large quantities.

So, on the 10th day after the devastating quake, the struggle continued to get food, water and critical supplies where they're most needed. As it is, scavengers have been seen rampaging through collapsed shops. And a U.S. charity reports that stick-wielding quake victims have made off with about 50 tons of rice, oil, beans and salt.

Some clinics say patients face a 12-day wait for care. There's a huge backlog at the airport, as well, with 1,400 flights on a waiting list for landing slots. Supplies are coming in to the capital, but they're not getting out to everyone who needs them, reports CBS News correspondent Bill Whitaker.

"We're so, so hungry," said Felicie Colin, 77, lying outside the ruins of her Port-au-Prince nursing home with dozens of other elderly residents who have hardly eaten since the earthquake hit on Jan. 12.

A melee erupted at one charity's food distribution point as people broke into the storehouse, ran off with food and fought each other over the bags.

As aftershocks still shook the city, aid workers were streaming into Haiti with water, food, drugs, latrines, clothing, trucks, construction equipment, telephones and tons of other relief supplies. The international Red Cross called it the greatest deployment of emergency responders in its 91-year history.

But the built-in bottlenecks of this desperately poor, underdeveloped nation and the sheer scale of the catastrophe still left many of the hundreds of thousands of victims without help. The U.S. military reported a waiting list of 1,400 international relief flights seeking to land on Port-au-Prince's single runway, where 120 to 140 flights were arriving daily.

"They don't see any food and water coming to them, and they are frustrated," said Prime Minister Jean-Max Bellerive.