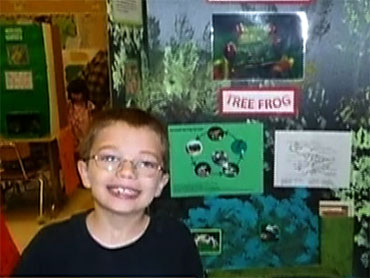 Search efforts continued over the weekend near Portland, Ore. for Kyron Horman, the boy who has been missing since June.

This time it's not a land search - instead, divers are scouring the murky bottom of the Multnomah Channel for evidence in the case.

In addition, Kyron's father Kaine filed a legal motion last week, implying that Kyron's stepmother, Terri, is implicating herself as guilty through her continued silence.

Kyron's parents say they still have hope he'll be found alive, but after months of a fruitless investigation, authorities have now launched a new search for evidence.

Kyron, who would be 8 now, was seven when he vanished.

For the past five months, investigators have been analyzing tips, pouring over clues and mounting extensive search efforts. So far, there has been no sign of Kyron Horman.

On Saturday, a new search for evidence was launched, this time underwater, as CBS News national correspondent Jeff Glor reports.

This weekend, dive teams from eight agencies began the painstaking process of searching the murky waters of the Multnomah Channel. Sophisticated sonar equipment helped pinpoint exact dive sites for the crew of 50, but they were hampered by water so black, one official called it "diving by braille."

"Not a lot of visibility some places, only a foot, but they take it slow and take it carefully and make sure they're safe," Mary Lindstrand of the Multnomah County Sheriff's Office explained.

It has been more than a month since officials and volunteers on horseback scoured Sauvie Island for evidence. And while the search for Kyron seems exhaustive, investigators still have not found the one clue that could crack the case.

"This is not a homicide, it's not a kidnapping for hire that we know of, or ransom and the fact is there's not even a discernable crime scene," Bruce McCain, a former captain from the Multnomah County Sheriff's Department, explained.

The search comes just days after Kaine Horman, Kyron's father, asked a judge to punish Terri Horman if she does not answer questions about her stepson. Terri was the last known person to see Kyron alive and has been a focus of the investigation.

In divorce documents, Kaine insists Terri "has information concerning Kyron's whereabouts" and that she won't talk because "her testimony will lead to criminal liability for Kyron's disappearance."

"No judge particularly in a divorce case is going to force Terri Horman to testify," Bruce McCain predicted.

The two are locked in a bitter divorce battle, also fighting over custody of their daughter Kiara. Earlier this month, Terri Horman withdrew a request for "parenting time" with the two-year-old after Kaine questioned Terri's "mental state," "fitness as a parent" and "credibility."

Police have not named Terri Horman a suspect in Kyron's disappearance, and her attorneys say Kaine Horman is using the divorce to "vilify" her in the court of public opinion.