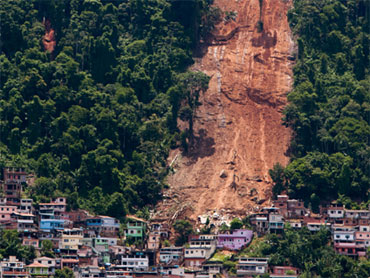 A small army of searchers clambered across a mountain of red earth and crushed homes on Saturday, hoping to find survivors of a massive mudslide that killed at least 26 people at an upscale island resort.

It was the worst of scores of slides and flooding incidents that have killed at least 64 people across southeastern Brazil.

A separate mudslide in the nearby coastal city of Angra dos Reis, 95 miles west of Rio de Janeiro, hit a slum, killing at least 13 people and reducing rickety shacks to rubble.

The dual mudslides early on New Year's Day were triggered by 10 inches of rain that fell on the area since Wednesday.

Hundreds of Brazilians die in mudslides each year, most of them slum dwellers living on precarious hillsides. But Friday's slide on Ilha Grande also struck affluent tourists who were vacationing in houses and a hotel at the foot of a jungle-shrouded cliff.

"We came to celebrate the New Year and then all this sadness happened," Fernanda de Oliveira, a witness to the mudslide on Ilha Grande, told the O Globo newspaper.

Oliveira was staying next to the Pousada Sankay resort, which was destroyed by the mudslide, along with three private homes. She said she heard a rumble in the middle of the night.

"We couldn't see what was happening. It was raining hard and the water was leaking into our house," she told O Globo. "Suddenly, we saw people in the sea and we went down to rescue them. They were people staying in the pousada."

The collapse of the hillside largely pushed the Sankay Pousada and homes into the sea and cut a 1,000-foot scar of slicked auburn mud across the rain forest.

In Angra dos Reis, a similar scene unfolded in an urban landscape, with reddish mud cascading into the Carioca slum.

Nearly 80 other mudslides have been reported throughout the region in recent days. Together with flooding, they have killed at least 64 people - 61 of those in Rio state. 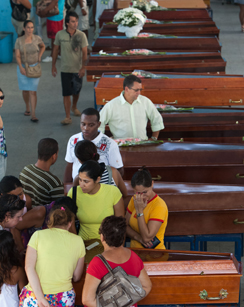 (AP Photo/Felipe Dana)
Another six people - all from the same family - are missing after a mudslide hit their house in the town of Cunha in Sao Paulo state, the Civil Defense there said. In Minas Gerais state, firefighters said three elderly people died when a mudslide hit their home, the state-run Agencia Estado reported.

(Left: People stand by the coffins of victims of two mudslides - in Morro da Carioca and on the island of Ilha Grande - in the city of Angra dos Reis, Brazil, Saturday, Jan. 2, 2010.)

Morgue authorities in Rio de Janeiro - where many bodies are being flown for identification - and Civil Defense authorities in Angra dos Reis have said all the identified victims are Brazilian. But they also say the death toll might double because many people remain missing.

In Angra dos Reis, 12 bodies from the two deadly mudslides were laid out in coffins in a school gymnasium for visitation by family and friends.

The rains halted Saturday morning, allowing searchers to intensify their efforts. But the muddy conditions and the hopes that survivors may still be buried under the mud meant efforts had to be carried out mostly by hand.
By Associated Press Writer Felipe Dana; AP writer Bradley Brooks in Rio de Janeiro contributed to this report