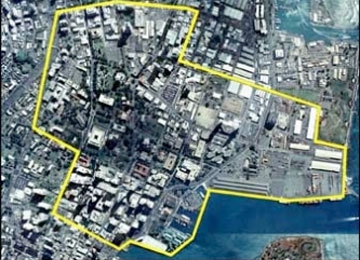 It came from the deep. And it will make offices cooler!

The State of Hawaii is working toward installing a massive seawater air conditioning system in Honolulu that could cut grid power consumption by 77 million kilowatt hours a year and eliminate the need to add 14 megawatts of peak capacity, according to Anders Rydaker, president of  Ever-Green Energy, which will provide the technology for the system and own and manage it through a subsidiary once construction is complete.

It will also reduce sewage from conventional air conditioning cooling towers by 84 million gallons a year, as well as eliminating demand for 23,000 to 69,000 pounds of the chemicals employed in conventional chillers.

So what is seawater air conditioning? Honolulu Seawater Air Conditioning LLC, the Ever-Green's local developer, will build pipes that draw seawater from four miles offshore at a depth of about 1,600 feet, said Rydaker. The water, which will be about 45 degrees Fahrenheit, will be drawn to an onshore cooling station. Heat exchangers will extract the chill in the sea water to fresh water contained in a closed-loop system.

The now-chilled freshwater will then circulate through the chillers in office buildings in Honolulu.  Chillers tend to keep water at 44 degrees Fahrenheit, so the cooling station will add some, but not a lot, of chill to the water.

The warmed seawater, meanwhile, will be returned to the ocean at an appropriate depth to its current temperature. In other words, it won't go back to 1,600 feet below the surface and screw up the environment.

In all, the system will provide 28,000 tons of refrigeration, he said, or enough for millions of square feet of building space. The area inside the yellow line describes the area where the company will make its air conditioning services available.

The project has been in development for six years, and roughly 80 percent of the design is complete. It will cost $245 million. The state has approved bonds to cover most of the cost, but, as with many green projects, financing is still not complete. Ideally, the project will be ready to start providing cooling in October 2012. (Rydaker and I chatted in the hallway at the Nordic Green II conference earlier this week.)

Ever-Green designed a much-smaller lake air conditioner at Cornell earlier in the decade.

Seawater air conditioning is effectively a version of district heating and cooling (DHC), a popular technique for delivering heat or air conditioning in Europe. In conventional DHC systems, an urban power plant generates electricity and heat by burning natural gas or biomass. The electricity is then delivered to customers over the grid while the heat is conducted to homes or offices in underground pipes to warm buildings or power hot-water heaters.

DHC systems can be over 60 percent efficient, he said, and they are also more environmentally friendly than conventional combined heat and power plants, he added. Ever-Green built a DHC system in St. Paul, Minnesota that has run on biomass since 2000. The fuel mostly comes from leaves and tree clippings in the surrounding area -- material that otherwise would have to be put into composting centers.

In Finland, two companies are erecting DHC systems that will harvest waste heat from data centers.

Air conditioning, as dowdy a topic as it might sound, has increasingly drawn the attention of regulators and entrepreneurs (see a cavalcade of cool companies in AC here). Cooling accounts for around 13 percent of the total energy consumed in commercial buildings and homes in the U.S. and buildings consume 39 percent of the total energy in the country. To top it off, air conditioning systems are not regulated with fine-tuned precision, so much of the power fed into them gets wasted.