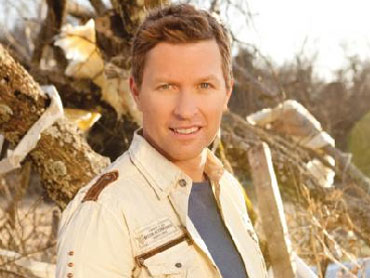 Craig Morgan has been riding high ever since kicking off his country music career a decade ago.

Since breaking onto the country scene in 2000, Morgan's landed on the Billboard Country charts 16 times, including eight Top 10 hits and two No. 1 hits.

Morgan stopped by "The Early Show Saturday Edition"'s Second Cup Cafe to perform, "Bonfire" off of his new album, "That's Why," as well as his older hit, "Redneck Yacht Club."

Born in Kingston Springs, Tenn., Morgan had aspirations of starting a music career, but instead he decided to serve in the U.S. Army. He was on active duty for 10 years as a paratrooper in the 101st and 82nd Airborne Divisions.

In 2008, Morgan was inducted into the Grand Ole Opry. Since then, he's made more than 150 appearances there.

He also plays more than 200 sold-out concerts a year.

"That's What I Love About Sunday," from Morgan's 2005 album "My Kind of Livin'," was the most-played country song that year. Three songs off of "Little Bit of Life" (the title track, "Tough" and "International Harvester") enjoyed stays in the Top 10, and he was nominated for Top New Male Vocalist by the Academy of Country Music in both 2006 and 2007.

Morgan is a family man. He has five children, four with his wife, Karen, as well as a daughter from a previous marriage.

He stays true to his country roots and resides in Dickson, Tenn.