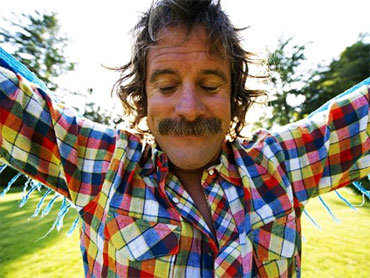 Singer/songwriter and pro-surfer Donavon Frankenreiter has a passion for the unexpected. And when it comes to making music and riding nature's marvels, he doesn't just skim the surface -- he takes the plunge.

"We don't have a set show, if we did, I would go crazy," he says. "You never know what's going to happen. I love that element of surprise with music and surfing -- you never catch the same wave twice," he says in his official bio.

Frankenreiter stopped by "The Early Show on Saturday Morning"'s "Second Cup Cafe" to perform "Glow" and "Keeping Me Away From You" from his fourth album, "Glow."

Recorded over a couple of days in California, "Glow" has the same sunny melodies, acoustic feel, laid-back rhythms, and scratchy, but sincere vocals of his previous work.

Growing up in Southern, Calif., Frankenreiter, 37, picked up his first surfboard when he was just 10 years old, and six years later he bought his first guitar. Then the marriage between his two passions further evolved.

Frankenreiter was influenced by music icons Eric Clapton and Jimmy Page as well as the lyrical skills of Bob Dylan and Bob Marley. He dabbled in different genres -- from his first high school band inspired by Pearl Jam, to a Southern rock group and then he continued to play rhythm guitar with a cover band and was fine with blending in the background. Then finally he decided to come front and center with a solo career.

Frankenreiter's good friend Jack Johnson (who was starting up Brushfire Records at the time) gave him a shot, producing his first album of folk songs, including the hit "Free," along with famed Beastie Boys collaborator Mario Caldato, Jr., according to his official biography.

Frankenreiter followed his 2004 self-titled debut with a full-band record, 2006's "Move by Yourself" (Lost Highway), where he chronicled his life on the road. Joe Chiccarelli (The White Stripes, My Morning Jacket) produced 2008 disc "Pass It Around," which featured guests Ben Harper and G. Love.

In 2010, he released, "Revisited," a track-by-track reinterpretation of his debut disc with a laid-back Hawaiian feel. He was taken by his surroundings when he relocated to Kauai full-time with his wife and sons, Ozzy and Hendrix three years ago.

He didn't stray from his light and airy vibe with his latest album, "Glow."